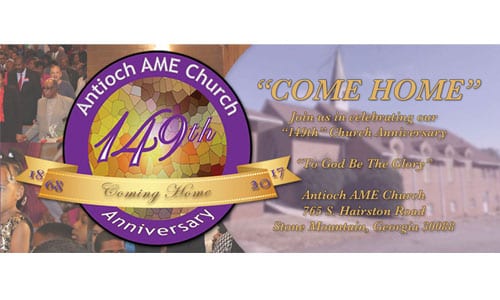 This week, Antioch African Methodist Episcopal in Stone Mountain is celebrating its 149th anniversary with several events including a gospel concert, which kicks off on Thursday.

Pastor Vandy Simmons invites the community to come out and learn about Antioch. The historic church was founded in 1868 by progressive-minded African Americans in Decatur, Georgia who wanted to see their own church flourish.

The church was built following the Civil War during the early reconstruction era. The congregation came up with the name “Antioch” after the city in the Scriptures where the disciples were first called Christians. Antioch was incorporated in October 1993 under the leadership of former minister, the Rev. Dr. Stafford J. Wicker.

The church anniversary events and activities are free and open to the public:

Antioch will host the “Oldies But Goodies” Gospel Concert with its Mass Choir performing on Thursday, Sept. 21, 7 p.m., at the 765 S. Hairston Road, Stone Mountain campus.

The Antioch Homecoming Picnic will be held on Saturday, noon until 4 p.m., at 4730 Elam Road, Stone Mountain. Bring your lawn chairs. The church will provide food and games.

For more information, please visit the church’s website: www.antioch–ame.org or call the church office at 404-299-3388.