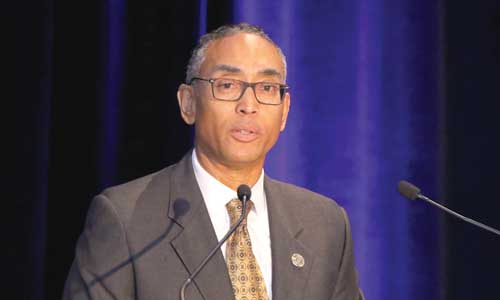 For the first time since the State Supreme Court unanimously reversed his wrongful conviction, Ellis will speak publicly about his ordeal of being wrongfully prosecuted. Ellis, now political director for the ACLU of Georgia, is one of three Georgians featured in a video series, “Voices of Smart Justice,” which the ACLU is debuting to highlight the importance of electing candidates in 2018 who support real reform.

After each video, Ellis, Dorothy Adams and Kate Boccia will discuss their experiences and answer questions from the audience.

The MC for the event is Ariane Davis, known for her role in Love & Hip-Hop Atlanta.

“I use my platform to promote a message bigger than myself. Thisis the reason I’ve teamed up with the ACLU of Georgia to promote Smart Justice Georgia,” said Davis.

The event moderator is Miguel Dominguez, who became the first Latino prosecutor in several metro Atlanta counties, including Rockdale, DeKalb, and Clayton. Dominguez is now in private law practice.

African-Americans make up 31 percent of the state’s total population yet represent almost two-thirds of its prison population.

About Dorothy Adams– An African American woman in her early 70’s who stole a $6.99 can of Planters nuts and was locked up for 15 days in horrific conditions because she was unable to pay a $1,000 bond fee. Adams, who continues to take medicine for her mental health issue, had not taken her medicine on the day of her arrest.

About Kate Boccia– A white, suburban mother remembers clearly the night she and her husband first received “the call” alarming them that their child had been arrested. Her “journey” was suddenly the same as a growing number of American families. Ignoring stigmas and shame, Boccia advocates for the families who are losing their loved ones to addiction and incarceration. Her most recent work is with an organization she founded and serves as its president, The National Incarceration Association. Her blog – Justice for Daniel– provides much insight.

About Burrell Ellis– The former DeKalb CEO was convicted in July 2015 of attempting to extort a contribution for his re-election campaign from a county vendor and perjury. Ellis was sentenced to 18 months in prison and five years on probation, but was released on March 1, 2016, after serving eight months. Ellis appealed the conviction.  On Nov. 30, 2016, the Supreme Court of Georgia overturned his sentence. The high court ruled Ellis did not get a fair trial because he was not allowed to present evidence that could have helped his case. The DeKalb Board of Commissioners voted in April 2017 to reimburse Ellis of $755,000 for his defense costs. In December 2017, Ellis was named political director for the ACLU of Georgia.