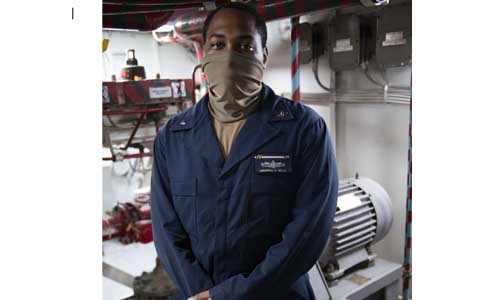 PACIFIC OCEAN (NNS) – Lithonia native Janorris Willis is serving aboard the USS Ronald Reagan (CVN 76), which is continuing to conduct security and defense operations with allies in the Indo-Pacific region.

Willis, a Machinist’s Mate 2nd Class Petty Officer, maintains and operates the air conditioning and refrigeration plants aboard the ship.

“I am here to support the mission by any means I can provide and proud to be part of the Reagan team,” said Willis.

Willis is among several U.S. Navy men and women whose stories are shared and distributed by the U.S. Navy’s Office of Community Outreach with the officers’ hometowns.

Since the ship’s Yokosuka departure in June, the Ronald Reagan continues to operate in the Indo-Pacific alongside allies and partners to demonstrate the USA’s commitment to defense agreements. The teams provide security and stability in support of a free and open Indo-Pacific region, according to the Navy’s Office of Community Outreach.

In early July 2020, USS Nimitz (CVN 68) and USS Ronald Reagan Carrier Strike Groups started conducting dual carrier operations in the Philippine Sea and South China Sea. These carrier strike groups incorporate the capabilities of embarked fixed and rotary wing aircraft, Aegis guided-missile cruisers and destroyers, and attack submarines. The opportunity for two carrier strike groups to train and operate together in the region provides combatant commanders with significant operational flexibility and capabilities that only the U.S. Navy can bring.

Most recently, the Ronald Reagan Carrier Strike Group completed a trilateral naval exercise with the Japan Maritime Self-Defense Force (JMSDF) and Australian Defense Force (ADF). Australia and Japan have both fostered longstanding alliances with the United States. This year also marks the 60th anniversary of the treaty of mutual cooperation and security between the United States and Japan.