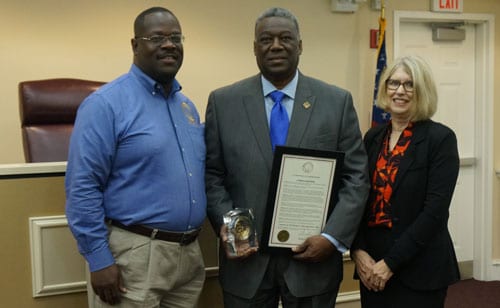 In a special ceremony held on Dec. 13, Rockdale County Chairman Richard Oden was honored during the Board of Commissioners’ work session for his eight years of service to the county. Oden’s term expires on Dec 31. Oden leaves as the first African American to hold the position in Rockdale’s 146-year history.

“He’s been dedicated to the people of this community. We are appreciative of the service of Chairman Oden and as we move forward here, in Rockdale County, we will do it in the spirit of his memory and all the tireless things he’s put into this community,” said Nesbitt.

Elected in 2008, Oden served two four-year terms as Chairman and CEO of Rockdale County. During his tenure, he served in leadership roles for local and regional boards including the Association County Commissioners of Georgia (ACCG) and the Atlanta Regional Commission (ARC).

Oden is also the recipient of several awards including the Atlanta Business League’s 2009 Class Men of Influence; the National Association of Minority Contractors 2011 Trailblazer Award; Rockdale Chapter of the NAACP’s 2013 Jean L. Williams Community Service Award; and the ACCG 2016 Emory Greene Leadership Award among many others.