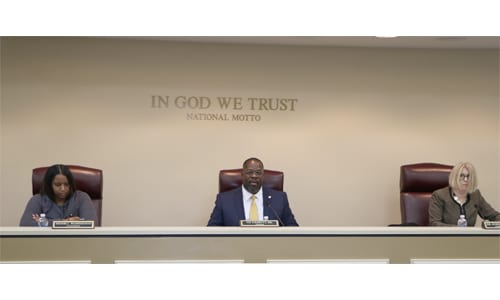 The Rockdale Board of Commissioners unanimously approved a resolution during a special called meeting for a $140 million general obligation bond referendum. The bond will fund the construction of a new courthouse, renovated administrative offices, a 675-space parking garage and a 500-seat amphitheater in downtown Conyers. Their action paved the way for voters to decide on the bond referendum on May 22.

Garvin Haynes was the first of five speakers during public comments following the board’s 3-0 decision to place the bond referendum on the ballot. Haynes acknowledged the county needs a new courthouse to replace the aging building that exists, an issue he said that officials have grappled with for many years. He said, however, residents should have input into the project and the county should take bids on the project.

“The board could have arbitrarily done this on their own. I thank you for not doing this, but for putting this up for the people to have an opportunity to have an opinion on it come May,” Haynes said.

Scottie Spence questioned the county’s recent $4 million purchase of Costley Mill Park as it called for the bond referendum, demanding: “If you knew good and well we needed this stuff, why did we buy a park?”

Josie Dean vowed that voters would remember the officials at election time.

“Y’all making and signing contracts and you don’t talk to us about any of this stuff. …If we have to recall y’all to get up out of here, we’ll do it,” Dean said.