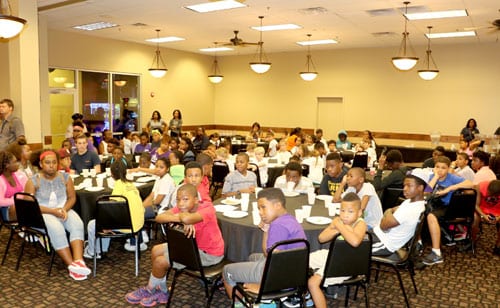 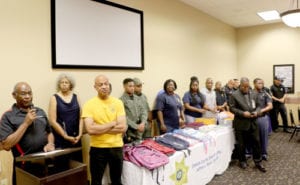 Dozens of DeKalb County school children beamed happily as they picked up free backpacks and school supplies handed out by DeKalb County Sheriff Jeffrey Mann and other public safety officials. The parting gifts were the finishing touches to a pizza/bowling party the sheriff held on July 20. DeKalb students will start the new school year on Aug. 8.

More than 100 children attended the “7th Annual Community Day with the Sheriff” at the Stars and Stripes Family Entertainment Center in Stone Mountain.

“Our goal each year since this program began has been to help school children learn to trust and respect law enforcement officials by meeting them one-on-one in a fun, friendly environment before returning to another school year,” says Mann. “In this current climate, it is particularly important that young people have this opportunity.”

Mann praised business owner Tom Walker, Sr., who helped organize the event. Walker, who founded Save Our Children, a nonprofit organization to assist youths, launched the Sheriff’s Community Day with former Sheriff Thomas Brown. The event used to be held at the Suburban Lanes bowling center in Decatur. Walker said he sold the bowling facility but remains involved in encouraging students to bowl and seek out bowling scholarships.

“I’m putting information in every backpack so that parents will be aware of the opportunities available. You can go all the way through college on bowling scholarships,” Thomas said.