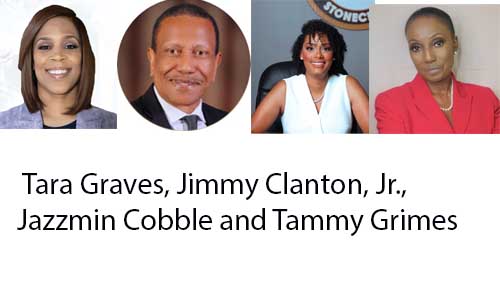 STONECREST, GA—Incumbents Jazzmin Cobble and Tammy Grimes were overwhelmingly re-elected to the Stonecrest City Council on Tuesday, each defeating two challengers in their respective races, according to unofficial results.

Meanwhile, Tara Graves appeared headed for a runoff with incumbent Jimmy Clanton, Jr. for the Post 1 City Council seat.  Graves received 41.94 % (325 votes), while Clanton received 37.68% (292 votes), according to final unofficial results released at 1:05 a.m. Wednesay by DeKalb County elections officials. A runoff would take place since neither Graves nor Clanton received the required more than 50 percent to claim a victory.  The runoff would be held on Nov. 30. Kwavena “Cubby” Nkromo was in third place with 20.13% (156 votes).

All results posted here are unofficial and must be certified by elections officials.