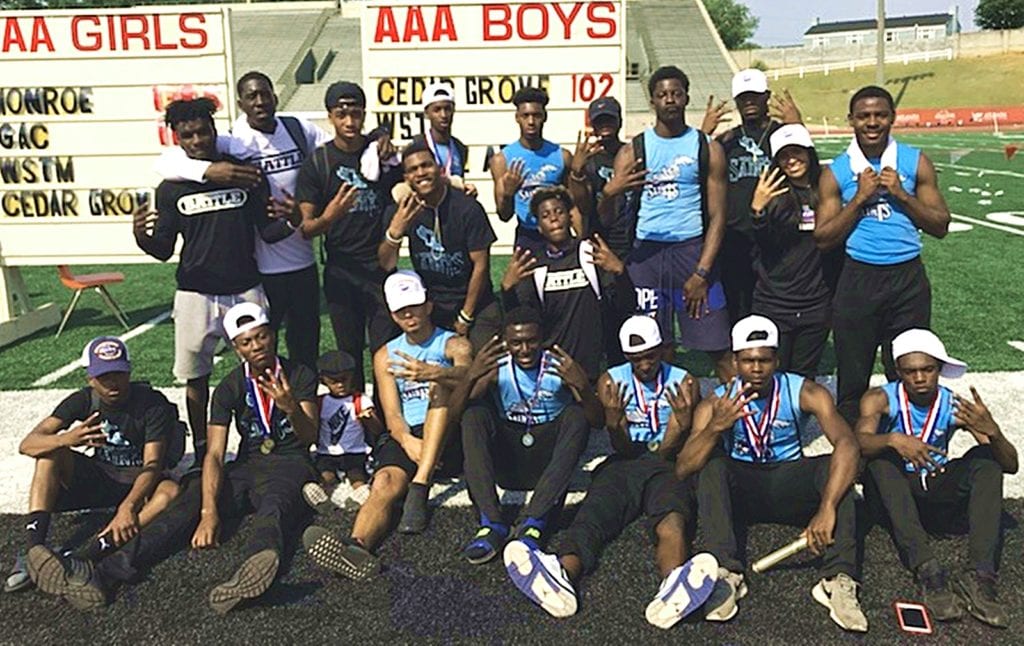 The victory was the Saints’ fourth consecutive state title setting a new benchmark in DeKalb County and they became just the seventh program in state history to win four in a row.

Cedar Grove trailed by over 30 points to Westminster heading into the track finals on Saturday but exploded for 88 points with five gold medal performances along the way.

Cedar Grove still trailed Westminster 90-84 heading into the final event of the meet with two teams entered in the 4×400 meter relay and needing at worst 16 points to tie Westminster if Westminster won the event.

The two teams responded with a 1-2 finish ahead of Westminster to clinch the title for the Saints. Deanthony Moore, Eric Davis, Oral Ashe and Terrence Lewin’s Team A raced to the gold in 3:18.92 while Team B consisting of Spivey, Cox, Tyvontae Stokes and Keshun Byrd took the silver in 3:19.93 to finish .56 of a second ahead of Westminster.

As the final day opened, the Saints quickly served notice they were not going away as Israel Spivey, Kortney Cox, Dimitri Cooper and Terrence Lewin teamed up the 4×100 meter relay to grab a quick 10 points with their gold medal winning time of 42.13.

Keshun Byrd also contributed a gold medal in the triple jump going 47-04.50 feet for the win.

The Lady Saints finished fourth in Class 3A with 31 points over the weekend.

Antania Swain led the way with a great toss of 120-09.00 feet to win the discus competition.

Southwest DeKalb and Miller Grove tied for ninth with Maynard Jackson and Bainbridge for Top 10 finishes in the Class 5A boys’ state meet at Carrollton.

Miller Grove finished fifth in the girls’ meet with 40 points. The Lady Wolverines were led by Emoni Coleman who defended her 2017 800 meter run championship with a time of 2:12.51 and then collected her second gold medal with a victory in the 1600 meter run with a time of 5:03.98.

Arabia Mountain had no one finish higher than fifth in the meet, but came in 15th overall with 14.50 points. Chamblee finished in a tie for 25th with Ware County and Locust Grove.

Stephenson and Martin Luther King Jr. finished fourth (33) and fifth (25.50), respectively, in the Class 6A girl’s state meet at Carrollton.