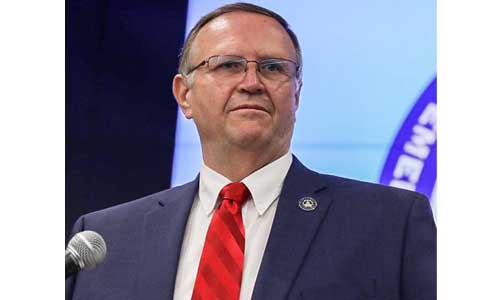 Gov. Brian Kemp announced that Chris Stallings will serve as director of the Georgia Emergency Management Agency (GEMA) and Homeland Security (HS), and Mike Smith as the GEMA/HS Chief of Staff following the retirement of Director Homer Bryson.

The announcement was made today (Sept. 1) during a press conference in the State Operations Center, following the retirement of Director Homer Bryson.

“I am honored to assume the role of Director of GEMA/HS,” said Stallings. “It’s humbling to be entrusted with this responsibility by the Governor, and I am looking forward to continuing the Agency’s legacy of protecting the lives and property of the citizens of Georgia.”

Stallings comes to the agency from the Georgia State Patrol, where he began his career in 2008 as a state trooper, and most recently served as the head of the Dignitary Protection Unit. Smith previously served as the deputy director of the Georgia Emergency Communications Authority.

“There are many challenges we continue to face with COVID-19, all while dealing with hurricane season and other threats,” said Stallings. “It’s a privilege to lead an experienced team that’s dedicated to ensuring Georgia has the resources needed to be prepared for any disaster, and win the fight against COVID-19.”

nextNOTICE OF DEKALB COUNTY BOARD OF EDUCATION VIRTUAL CALLED MEETING