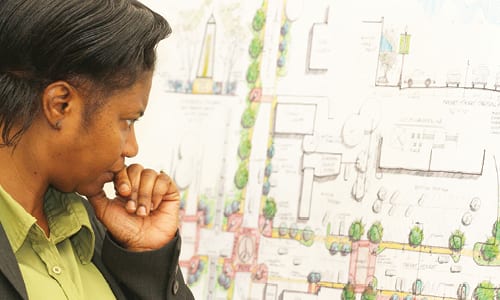 The City of Clarkston’s long-awaited streetscape project is finally getting under way, after seven years of planning, public meetings, and acquiring matching funds.

City officials kicked off the project with a groundbreaking ceremony on May 4. Officials said the $6.5 million transformation would include stormwater and utility infrastructure improvements, wider sidewalks, newly paved streets, a pedestrian bridge, and new gateways to the city.

City officials said the project is expected to be completed in 18 months.

Barker said the city became eligible to receive up to $4 million in federal funds administered through the Atlanta Regional Commission (ARC) in 2006.

In 2011, the Clarkston City Council authorized staff to begin the process to acquire the matching funds required for the project.

The city received $3.7 million in loans through the Georgia Transportation Infrastructure Bank (GTIB), a grant and low interest loan program administered by the State Road and Tollway Authority, Barker said. Those funds were awarded in 2013 and 2017.

“SRTA is proud to have contributed to the City’s Streetscape Project,” said Chris Tomlinson, SRTA Executive Director. “The GTIB program was created for projects such as this, which improve mobility, sustain development and enable local communities to thrive.”