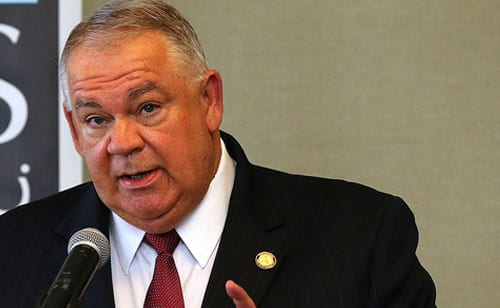 “It is my hope that we will begin this work with a spirit of optimism and with a commitment to the ideals of civility, mutual respect and decorum,” said Speaker Ralston. “Today, we are a growing, dynamic state – reaching with optimism to a future filled with promise and greatness.”

“We begin this Session at a moment of unprecedented change,” continued Speaker Ralston. “Our Nation has chosen a new course, due in part to the feeling of many that their voices were not being heard. I am hopeful that one result of this change will be a return of power and authority to the States, including our own, because I for one reject the notion that Washington knows best.”

Ralston listed some key issues he anticipates the House will focus on during the upcoming session:  healthcare, education, public safety personnel salaries and benefits, and economic development and job creation.

The Speaker serves as the presiding officer of the House of Representatives. He or she is elected by fellow members of the House to serve as the chamber’s leader at the beginning of each two-year term. The Speaker of the House is the third in the line of gubernatorial succession.