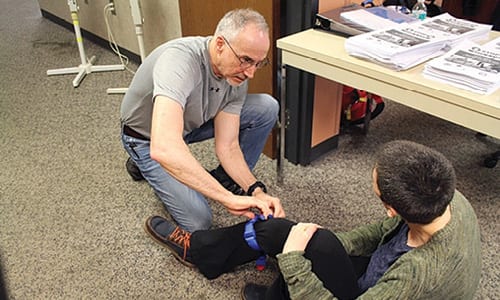 Participants received instruction on bleeding control techniques from significant traumatic injuries such as workplace incidents, car accidents or an active shooter event. The course included hands-on demonstrations in which attendees practiced traumatic care of putting on tourniquets, applying pressure to slow bleeding and packing a wound with materials available.

“The Stop the Bleed training program is something that everybody in the community should take advantage of,” Emergency Management Director Sue Loeffler said. “Victims of uncontrolled bleeding can die in a matter of minutes and bystanders are always the first on any scene. Just like CPR, it has the potential to save lives if done properly.”

Stop the Bleed began in October 2015 by the White House as a national awareness campaign and call to action. In 2017, Georgia launched its Stop the Bleed campaign, putting the knowledge gained by first responders and military into the hands of the public to help save lives by stopping uncontrolled bleeding in emergency situations. Through the Georgia Trauma Foundation, each public school in the state is being trained and equipped with Stop the Bleed kits. DeKalb County is leading an effort to educate and equip its citizens and county departments to “Stop the Bleed.”

For more information on the Stop the Bleed program and to learn more about upcoming opportunities, contact DeKalb Emergency Management Agency at 770-270-0413.