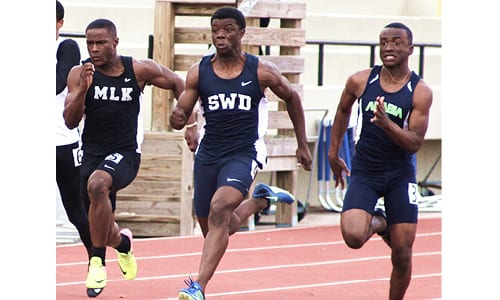 Cedar Grove swept the Region 5-3A boys’ and girls’ track championships last weekend as part of six region titles that were brought home to DeKalb County.

The Lady Saints outdueled Westminster 163-158 while qualifying nine track and field individuals and 3 relay teams for Saturday’s Class 3A State Sectional B at Bremen High School.

Israel Spivey and Jadon Haselwood collected two gold medals each out of the seven collected by the Saints. Spivey won both the 100m dash (10.86) and 200m dash (21.74) while edging out teammate Kortney Cox in both events. Haselwood grabbed the gold in the 110m hurdles (14.87) and 300m hurdles (41.25) with wins over teammate Dimitri Cooper in both events.

The Miller Grove girls and Arabia Mountain boys came away with the Region 5-5A track titles at Godfrey Stadium.

The Lady Wolverines captured 10 gold medals on the way to a 195-140 victory over Arabia Mountain and qualified 15 individuals and three relay teams for the Class 5A Sectional B at Eagle’s Landing High School on Saturday.

The Arabia Mountain Rams outdistanced Southwest DeKalb 145-101 to win the boys’ title with 10 individual sectional qualifiers and one relay team.

Miller Grove’s productive meet including gold medals by Chuck Shawn Collins in the 400m dash (49.51), Walik Robinson in the 110m hurdles (14.79) and the 4x400m relay team (3:22.18). The Wolverines qualified six individuals and three relay teams for the sectional.

Clarkston put together a strong region meet with three gold medals and a fourth place finish with 91 points. Ngabo Daniel won two gold by being victorious in both the 1600m (4:42.91) and 3200m (10:16.86) runs. Tyrell Simmons was the pole vault winner (7-06.00) to complete the Angora gold medal haul. Nine Angoras qualified for the sectional.

Chamblee picked up one gold with its fifth place finish (82) as Rasheed Cobb ran to the 800m (2:05.90) title. The Bulldogs qualified six individuals for the sectional.

Lithonia qualified three individuals and two relay teams for the sectional and Columbia put one individual through.

Stephenson and Martin Luther King Jr. split the Region 4-6A titles as 46 individuals and 10 relay teams qualified for the Class 6A State Sectional B at Atlanta’s Lakewood Stadium on Saturday.

The Lady Jaguars had just two gold medal winners, but also added six silver and four bronze medal finishes to get past the Lady Lions 142-107.

Tucker qualified one individual and two relay teams for the state sectional.

Dunwoody qualified five girls and one boy for the sectional at Lakewood out of Region 7-6A. Ariel Lawrence won the long jump (18-01.50) to lead the Lady Wildcats. Ben Bass was third in the pole vault (10-00.00) to top the Wildcats.

Druid Hills picked up 10 individual qualifiers and three relay teams for the Class 4A Sectional A at Blessed Trinity with their performances at the Region 4-4A Track Championships.

Lakeside advance three girls and three boys to the Class 7A Sectional B at Mill Creek High School on Saturday behind their Region 7-7A performances last week.