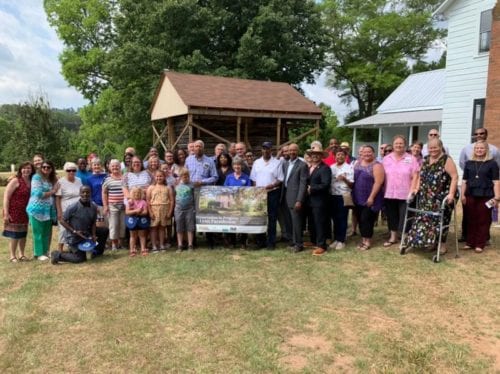 Denise Williams instantly recalled the rich wood scent that filled the Lyon home where she grew up.

“The house still smells just like it did when I was a little girl,” said Williams.

Williams, the niece of George and Betty Lyon, the couple who lived in the house for over 20 years, traveled back in time as she walked through the house for the first time in years. Williams was among several descendants of the Lyon family who visited on May 31 to witness the dedication of the 150-year-old home located in what is now the city of Stonecrest. The historic home is one of DeKalb’s oldest homesteads.

Williams said she was pleased to be a part of the celebration. The dedication marked the culmination of the first phase of preservation efforts of the property, a collaboration between various partners including the DeKalb County Department of Watershed Management, the DeKalb County Board of Commissioners, the Arabia Mountain Heritage Area Alliance and Flat Rock Archives, among others.

In 2003, DeKalb County’s Department of Watershed Management (DWM) purchased the Lyon Farm, over 100 acres,as greenspace to buffer the Pole Bridge Advanced Wastewater Treatment Plant and Sprayfields in the area. In 2016, the house was placed on the Georgia Trust for Historic Preservation’s “Places in Peril” list due to advanced structural damage, potential for imminent loss, and its historic significance, officials said. Last fall, DWM kicked off work on the historic structure, spending a total of $225,000 to start the preservation.

Now, after months of careful repairs, the home has been stabilized by contractor F.H. Paschen. The work included jacking and leveling the entire structure, stabilizing the foundation, rebuilding part of one of the chimneys and replacing the roof and siding.

“We reused most of the same structure that was already on the house,” said Wayne Thompson of F.H. Paschen.  “All the material had to match the historic blend we still needed to have. We used modern versions of the old material to do that.”

Kelly Jordan, co-founder of the Arabia Mountain Heritage Alliance, praised the project, saying it would be a treasure for local residents and tourists to explore.

“The Alliance has been working with DeKalb County and other partners for nearly two decades now to preserve numerous historic structures, including the Lyon home, which is one of our most special projects,” said Jordan.

According to the Alliance, a log cabin was likely the first structure built on the property in the 1820s. The footprint was expanded in 1853 and again in 1893, creating the house that stands today.

Congressman Hank Johnson, who attended the dedication with his wife, DeKalb’s District 5 Commissioner Mereda Davis Johnson, said the preservation is an important aspect of DeKalb’s history. The congressman noted that the black community of Flat Rock was birthed from the Lyon farm after slavery in the U.S. ended in 1865.

“This is our history and I’m so happy that a history of black people is in the Lyon family history and property,” said Congressman Johnson, who, as a commissioner in 2002 approved the allocation of funds to preserve the property as greenspace.

“I’m from a freed slave town in Tennessee, so I have great appreciation for the preservation of this home,” said Johnson.

According to historians, about 17 slaves lived and worked on the farm in 1860. Some were field hands while others worked as house servants and lived in the basement of thehome with only a small window and a hand built fireplace.

Even after slavery, the farm was used by many generations of the Lyon family all the way up until 2007, according to historians.

Caleb and Christina Cook, also descendants of the Lyon family,were dating when they last lived in the house around 2007. The now married couple said they couldn’t believe how much has been done on the home.

Stonecrest Mayor Jason Lary, who attended the dedication, said he believes the preservation project will be a big draw for anyone interested in Georgia history. The city of Stonecrest, he said, made history when residents in the area voted to incorporate in 2016, making Stonecrest the largest city in DeKalb with a current population of about 54,000.

“It (the Lyon homestead) adds to our history. Even though we’re only 2 years old, we’re adding history that is now 150 years old,” said Lary.

Johnny Waites, a black descendant of the Flat Rock community, has been sharing the history of Flat Rock and the Lyon family farm for years.

“I feel a sense of relief and gratification to have this tremendous project that has been advocated for so long, finally executed,” said Cardenas. “With all of this, we are at the beginning of this project, not the end.”

Plans are under way for guided tours and interpretive signage detailing the stories of the Lyon family, the community of Flat Rock and rural life in Georgia. Sign installation is planned for this summer.