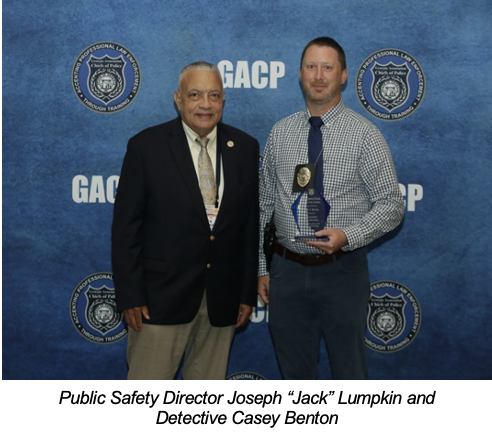 DECATUR, GA–DeKalb County Police Detective Casey Benton has been named by the Georgia Association of Chiefs of Police (GACP) as the 2021 Outstanding Police Officer of the Year.

Detective Benton, who has been with the DeKalb County Police Department for 15 years, received his award in July 2021 during the GACP’s training conference in Savannah.

” src=”cid:clip_image003.jpg” alt=”clip_image003.jpg” width=”123″ align=”left” hspace=”12″ vspace=”5″ v:shapes=”Text_x0020_Box_x0020_2″ apple-inline=”yes” class=”Apple-web-attachment Singleton” style=”opacity: 1;”>“DeKalb County is fortunate to have Detective Benton not only because of his exceptional work ethic, but most importantly for his dedication to protecting the community’s most valued resource–children,” DeKalb County CEO Michael Thurmond said.

Detective Benton joined the department’s Special Victims Unit five years ago and became a member of the Internet Crimes Against Children (ICAC) Unit in 2018. In 2020, he handled 115 cyber tips, executed 34 search warrants and made more than 25 arrests related to crimes against children including sex exploitation, trafficking and other felony offenses.  He not only works with the community and other law enforcement agencies, but he is assisting Georgia Tech in the development of a research tool that will be instrumental for ICAC Units across the nation.

“I am proud that Detective Benton was honored for his extraordinary work by the Georgia Association of Chiefs of Police,” said DeKalb County Police Chief Mirtha V. Ramos. “He is part of a great team here in the DeKalb County Police Department who work at excelling every day.”

The DeKalb County Special Victims Unit/ICAC Unit has received numerous accolades including the 2020 Certificate of Excellence for Most Cyber Tips Received and in 2019, the GBI recognized the unit for the most recovered commercial sexual exploitation of children victims.