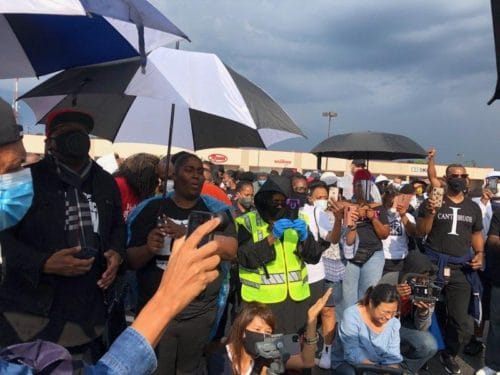 The Enough is Enough! We Will Breathe Again” demonstration was held on June 15, three days after Rayshard Brooks, 27, was fatally shot by an Atlanta Police officer, Garrett Rolfe following a complaint that Brooks fell asleep in a car while sitting in the drive-through of a Wendy’s restaurant. Rolfe, who is white, was charged with the black man’s murder. Officer Devin Brosnan also was charged in the shooting with four counts, including  aggravated assault,  after standing on Brooks’ shoulder as Brooks lay dying.

Brooks’ funeral will be held today, June 23, during a private service at the Historic Ebenezer Baptist Church in Atlanta. A public viewing was held on Monday, June 22, at the church.

Brooks’ death, along with George Floyd, who was killed by a Minneapolis, MN police officer on Memorial Day after the officer kneeled for nearly nine minutes on Floyd’s neck until he could not breathe, have sparked demonstrations across the nation against police brutality.

Said Johnson: “I am profoundly saddened by the action that has taken place over the last several weeks with police officers murdering unarmed black men and women.    We must continue to work collaboratively as the behavior we have experienced over the last several weeks is not representative of majority of the men and women who wear blue.  I have built very strong relationships with our public safety community and have helped to bridge the gap with the community to foster better communication and mutual respect.  We will continue to nurture and build off of those positive experiences and engagement with our community conversations and law enforcement.”

Participants in the demonstration included: