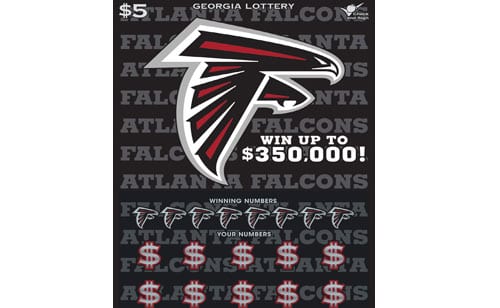 ATLANTA – For the eighth consecutive year, the Georgia Lottery Corp. and the Atlanta Falcons have teamed up to kick off another new instant game.

Atlanta Falcons is a $5 instant game with top prizes of $350,000 and many other great prizes. Tickets went on sale at Georgia Lottery retailers statewide on Tuesday.

“We are excited to continue our very successful partnership with the Atlanta Falcons,” said Georgia Lottery President and CEO Debbie D. Alford. “With profits from each ticket purchased benefiting the lottery-funded HOPE Scholarship and Pre-K programs, Georgia’s students score big with this great new game.”

In conjunction with the scratch-off game Atlanta Falcons, players will have additional chances to win prizes with the Ultimate Fan Tailgate Giveaway promotion from Sept. 9 through Dec. 15.

“We are very proud of our longstanding partnership with the Georgia Lottery,” said Tim Zulawski, senior vice president and chief commercial officer of AMB Sports & Entertainment, parent company of the Falcons. “The Falcons-themed scratch-off ticket has successfully raised money for the HOPE Scholarship and Georgia Pre-K programs, while being a great way for our brands to connect with Falcons fans throughout the state of Georgia.”

Since its first year, the Georgia Lottery Corp. has returned more than $17.6 billion to the state of Georgia for education. All Georgia Lottery profits go to pay for specific educational programs, including Georgia’s HOPE Scholarship Program and Georgia’s Pre-K Program. More than 1.7 million students have received HOPE, and more than 1.4 million 4-year-olds have attended the statewide, voluntary prekindergarten program.