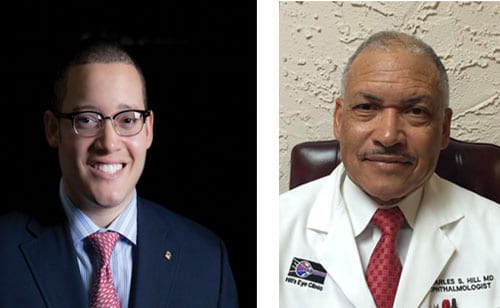 Charles S. Hill, M.D. and his son, Charles S. Hill II, have launched their joint exploratory committee for the City of Stonecrest offices of Mayor and City Council District 5, respectively.

Dr. Hill is a Harvard-trained ophthalmologist who owns and operates Hill’s Eye Clinic, which has served South DeKalb over 30 years. Hill said he is considering running for Mayor of Stonecrest because he is tired of the corruption, graft, and incompetence in DeKalb County government in addition to people running for public office only to enrich and aggrandize themselves. He said he believes the best candidates for public office are those who are not seeking or need to gain anything personally from holding office and if he decides to run for mayor, he will not accept a salary, if elected.

Charles S. Hill II is vice president of Rooms Around Campus, LLC and current graduate student at Yale University (graduating in May 2017) with prior degrees from Morehouse College and Harvard University. He recently ran for House District 91. He was born, reared and educated in what is now the City of Stonecrest, graduating in the Lithonia High School Class of 2003.

“My potential candidacy represents an opportunity for the City of Stonecrest to have fresh millennial leadership help guide our new city to success,” said Charles S. Hill II.