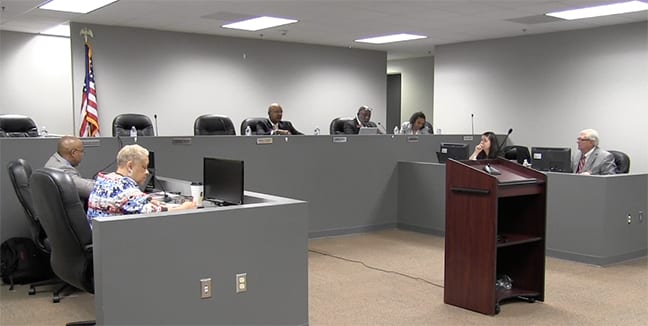 Infighting and three absences forced the cancellation of today’s special called City Council meeting after a quorum of four could not be reached.

Only three of the council’s six members were present for the meeting: Council members Jazzmin Cobble, George Turner and Rob Turner, who all called for the meeting.

The meeting started late because the three members who attended were waiting for their colleagues to show up. Council member George Turner, mayor pro tem, called the meeting to order. There was no invocation or Pledge of Allegiance to the flag.

Adoma said that her absence, however, was planned well ahead of the meeting. She said she notified the council and other city officials that she would not be attending. She said she thought there would be a quorum.

“I told them that I would be away attending my grand-daughter’s recital,” Adoma said. “I’ve never missed a meeting and I didn’t think there would be a problem today.”

Council member Jimmy Clanton said he had a personal matter that required his attention.  The mayor said he was absent because he was handling an urgent matter that came up this morning.

The City Council was supposed to discuss and then vote on the city’s SPLOST management contract and related business.

Now, another special-called meeting has been announced for Thursday, May 3, at 10 a.m., at City Hall. Clerk James sent out the notice of the special called meeting at 1:52 p.m. today. The agenda is the exact same as the agenda for today’s meeting.

So what will be different about Thursday’s meeting? It’s anyone’s guess. Tension has been building over awarding a contract worth $3.8 million to Grice Consulting, Inc. to manage the city’s SPLOST program. The 6-year, $47 million SPLOST program is slated to fund several infrastructure and capitol improvement projects including road repairs, developing a master plan for parks and recreation, and the construction of a public safety building for police and City Hall.

The council has been divided over the Grice agreement since the company sent the city its invoices last year. Lary said the city received an initial invoice for $56,840, 10 days after the City Council approved the agreement, signed on Aug. 1. The second invoice of $14,840 was received on Oct. 1, 2017. The mayor said Grice billed the city a total of $162,000 through November 2017, including $20,000 for handling SPLOST  community meetings.

City Attorney Tom Kurrie said Grice identified a list of SPLOST projects for the voter referendum and conducted community presentations to inform the public about SPLOST. Kurrie said city officials worked out an agreement to pay Grice $40,000 for pre-SPLOST work.

After modifying the agreement with Grice, city officials selected another company—Stantec—to do the road analysis portion of the work.

At the February meeting, however, Councilmembers Adoma, Rob Turner and Cobble expressed concerns about dropping Grice and giving some of the work to Stantec. The council deadlocked on the Stantec proposal with the three voting against Stantec.

At the April 16 meeting, the Grice agreement came up again and the council deadlocked on awarding the contract to Grice. A discussion was held about bringing some of the work in-house, rather than keeping Grice on board and some of the council members objected to that plan as well. The marathon meeting lasted for seven hours, ending around 1 a.m.

Now, the council is preparing to discuss the SPLOST project management contract on Thursday (May 3).

“There’s been a lot of stuff going on in the background and I could care less about it,” said Councilmember Clanton. “I just think it’s best that we bring everything to the table and have a discussion. So, I’ll be there.”

Adoma, however, said she is unavailable due to prior commitments. The mayor said today he doesn’t know if his personal matters will be resolved in time for the Thursday meeting. He has asked for the meeting to be held on Monday, May 7.

previousWhy are so many Rockdale restaurants failing?