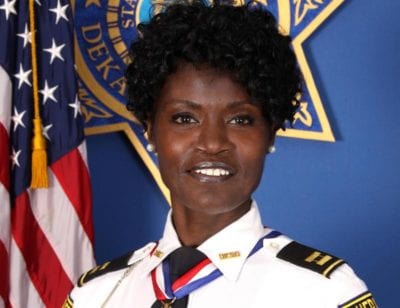 Captain Ruth Stringer has been appointed to serve as DeKalb County’s interim sheriff while Jeffrey Mann serves a 40-day suspension mandated by Gov. Nathan Deal. The governor appointed a special panel to investigate Mann who was charged on May 6 with public indecency and obstruction (running from police) after allegedly exposing himself in Atlanta’s Piedmont Park. Mann, who has pleaded not guilty to the charges, goes to trial on July 7.

Sheriff Stringer was sworn in and began her new assignment on June 13.

“I am pleased to be able to serve in this capacity,” says Interim Sheriff Stringer. “With the support of my more than 800 dedicated colleagues at the sheriff’s office, I will continue our commitment to the safety and security of the communities we serve and to performing at a level of excellence in all that we do.”

Interim Sheriff Stringer, a DeKalb County resident, began her career with the agency on June 9, 1990 as a Detention Officer in the DeKalb County Jail and has been promoted to increasing positions of responsibility in various divisions, achieving the rank of Deputy Sheriff Captain in the Training, Background and Recruitment Division in 2010.

In September 2009, then Lieutenant Stringer received the DeKalb Sheriff’s Medal of Valor and she was named Officer of the Year by the DeKalb Bar Association for actions she took while off-duty that resulted in saving a young girl from being assaulted in Stone Mountain Park.