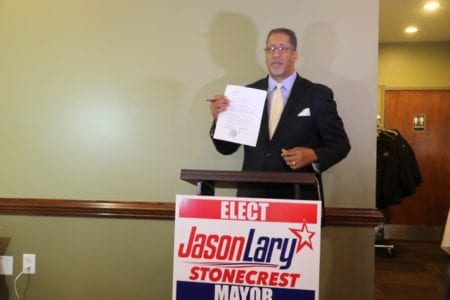 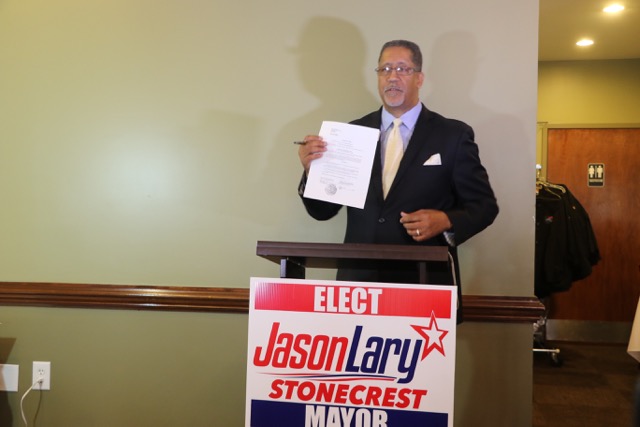 Today, Stonecrest mayoral candidate Jason Lary released his tax returns, FICO score and the deed to his home during a noon news conference at This Is It restaurant on Panola Road in Lithonia.

Lary said he held the meeting to address “financial issues” cited by opponents. He said releasing the documents to the public demonstrates his promise to be transparent and he challenged Charles Hill, Jr. and Douglas Favors II, who also are running for mayor, to do the same. Hill has questioned bankruptcies filed by Lary, stating his concerns that Lary would be responsible in handling taxpayers’ money.

“This is part of being transparent. If you want to be out there, if you’re going to make these statements then you share everything that I’m sharing. I want to see it all and I want all of the citizens to see it all the same way,” Lary said.

Lary said he is uniquely qualified to be mayor because he led the effort to help form the city, campaigning relentlessly for the referendum that led to cityhood.

“I want to tell you publicly—because I feel this way—I am Super Man. I know this for sure… I know that I’m mentally and physically fit to do exactly the work we need to do with regards to the City of Stonecrest,” Lary said.

On Common Ground News contacted Hill this evening to ask if he planned to make his financial information public and he said he didn’t see the need to disclose that information.

“It’s not required by law. Someone’s tax returns do not reflect what bankruptcies they may have. If they’re living above their means and filing bankruptcies, that is not being financially responsible. Tax returns don’t show that,” Hill said. “I’m not going to let Jason Lary dictate to me what I need to do concerning my finances,” said Hill. “I just think this whole thing is highly unusual to hold a press conference and brag about how much money you make. It’s just a way for him to try to create a media buzz just before the election.”

The special election for the mayor’s race and five district City Council seats will be held on March 21.

Lary rejected the notion that the news conference was a publicity stunt.

“He opened this up. Let’s dance now,” Lary said. “This is about being transparent. That’s what I’ve done.”