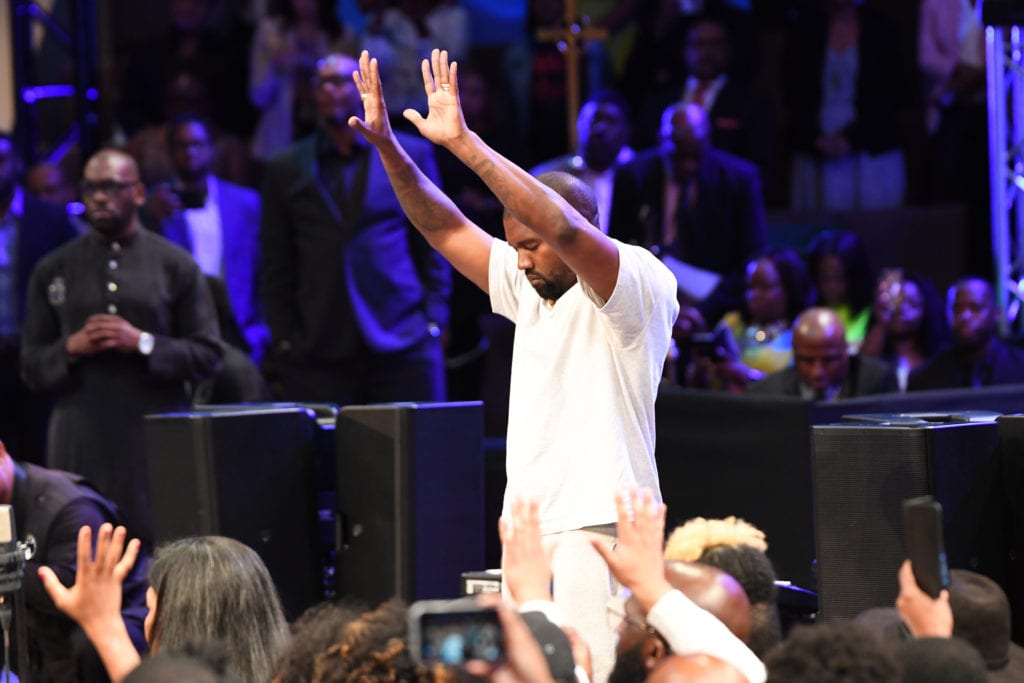 The ‘Stronger’ and ‘Jesus Walks’ artist led a 600-person choir, 150 of those traveling from California to join New Birth’s choir and other local singers, for the pop-up praise and worship event.

“At a time where unfortunately, the church is becoming less and less relevant to this generation of young people, we are committed to doing all we can to shift that mentality and show that the church is not only relevant but necessary,” said New Birth’s pastor, Dr. Jamal Bryant. “This was an incredible day that started with a dynamic message by Bishop I.V. Hilliard and proceeded to a redefined worship experience led by Kanye West.”

West has been doing the pop-up services in various locations for nearly a year. The events have attracted a number of celebrities and guest pastors.

While appearing on a recent episode of The View, Kim Kardashian West explained that her husband initially started his “Sunday Service” events to “heal himself.”

“Kanye started this, I think, just to heal himself,” Kardashian explained. “It was a really personal thing, and it was just friends and family. He has had an amazing evolution of being born again and being saved by Christ.”

“For the most part, it’s just a musical ministry,” she says. “(West) doesn’t have his 501(c)(3) yet to make it an official church, but it is for God and it is a Christian church. It started off healing for him and now it’s become something that he really wants to share for everybody else.”

New Birth’s praise and worship experience was coordinated in about 36 hours, organizers said. The event was filled with traditional gospel songs and secular hits with modified lyrics. From the Christian ballad, “How Excellent,” to West’s remixed “Father, Stretch My Hands,” the 30-minute worship service worked to bridge the gap between various generations and music affinities.

“On Sunday, it was Kanye West. Last month, it was our shoe drive for undeserved students in our community and the month before that, we worked to bail out non-violent offenders to reconnect them with their families,” Bryant said. “All of it is important and hopefully, effective in engaging our next generation of leaders and winning souls for the body of Christ.”

Social media was abuzz as word spread of West’s pop-up service at the Stonecrest mega church. “

“We have to be intentional about being unconventional in our efforts in connecting with young people. It doesn’t matter if it’s Facebook, Twitter or Instagram, we want to meet various generations where they are,” Bryant said.