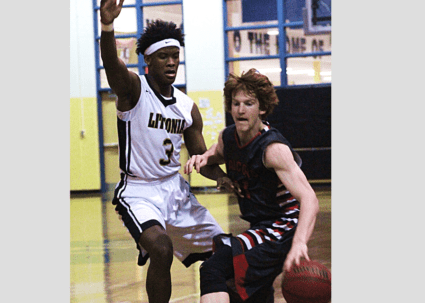 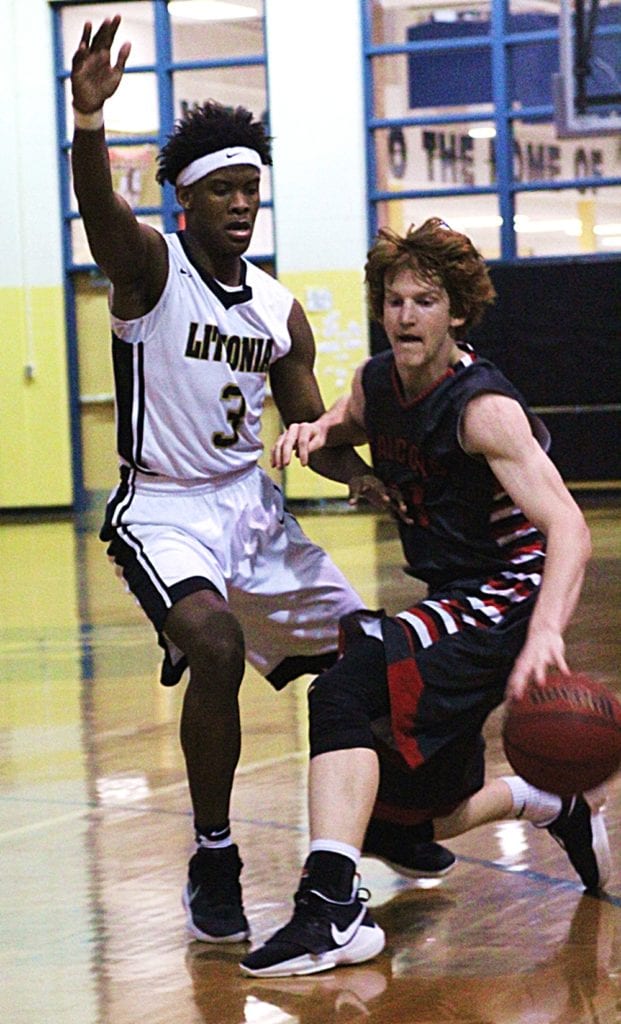 The No. 3 ranked Lithonia Bulldogs struggled from the field for much of the game before dominating overtime 15-3 in a 51-39 victory over the Flowery Branch Falcons on Thursday night(Feb. 22) at Lithonia.

After trailing for the majority of the second half, the Bulldogs tied the game on a pair of Eric Gaines free throws with 10 seconds to play to send it to overtime.

DJ Brown hit one of two free throws for Flowery Branch with 3:05 to play to make it 37-36 and it would be the last point of the game until 18 seconds reclaiming for the Falcons.

Lithonia took the lead for good on Ziven Alexanders two free throws with 2:33 to play. A turnover led to a Zephaniah Corker three-pointer to make it 41-37 with 1:52 to play. Two more big blocks in the next 14 seconds led to Justin Myles layup and free throw to complete an old fashioned three-point play for a 44-37 lead with 1:06.

Gaines would hit two free throws and Bryson Rockcliffe would hit four in a row with 2.3 seconds to play after being fouled and a technical on Flowery Branch to close out the 51-39 win.

Trailing 21-16 at the half, Flowery Branch (18-12) got hot from behind the three-point arc in the second half with Justin Quick’s three-pointer with 4:37 to play in the third quarter gave the Falcons their first lead of the game at 24-23.

The Bulldogs (23-6) trailed 26-24 heading into the fourth quarter as the shooting woes led to just three points after the break. A three-pointer by Corker with 7:05 left in regulation kind of opened the door for Lithonia.

Flowery Branch answered with two-threes, one each by DJ brown and Joey Nidoyz, to go up 34-30 with 3:57 remaining in the fourth quarter.

Lithonia turned up the defense and force three turnovers and blocking five shots to climb back within 36-34 with 24 seconds to play. Flowery Branch got inside for what appeared to be an easy layup, but Justin Myles recovered in time to block the shot and Bryson Rockcliffe rebounded and got the ball up to the court to Gaines.

Gaines was fouled going to the basket and went to the line with 10.6 seconds to play with two free throws. He hit both to tie the game at 36-36 and Flowery Branch called timeout.

The Falcons got the ball down court but another block and a scramble for the rebound ended with Lithonia getting to inbounds with 2.3 seconds to play. A long shot attempt was short and the teams went into the overtime.

Lithonia finished with 13 blocks in the game and force 17 turnovers. Justin Myles led the way with 11 points for the Bulldogs. Justin Quick had a game-high 12 points to lead Flowery Branch.

In other Class 5A boys’ state tournament action, the No. 4 ranked Miller Grove Wolverines traveled to Buford and knocked off the Wolves 79-75 in a hard fought Sweet 16 matchup of Top 10 teams.

Maurice Harvey hit for 31 points and TJ Stargell’s three-pointer with 4:41 to go in the third quarter gave the Wolverines the lead for good at 44-41.

Leading 77-75 after Buford hit a pair of three-pointers, Kevin Paige was fouled with 5.2 seconds to play and missed both free throws. Teammate Lorenzo Anderson had his back getting the rebound and being fouled with 3.5 seconds to play.

Anderson knocked down both free throws to make it a 79-75 lead and sealed the big road win for Miller Grove (21-7). Buford finished the season 24-5.

Miller Grove goes on the road to Dutchtown (16-14) next Wednesday. Dutchtown upset Statesboro 75-73 in double overtime on Thursday to advance.

Hiram came back to go up 30-28 with one quarter to play. The game was tied at 39-39, but Hiram pulled out the overtime victory. KD Johnson had 17 points to lead the Panthers.

Cedar Grove rolled to a 35-28 halftime lead and opened the second half with more tough defense as the lead increased. The Saints will host No. 5 Jenkins of Savannah (22-5) on Wednesday.

Game times for all games will be announced at a later time.