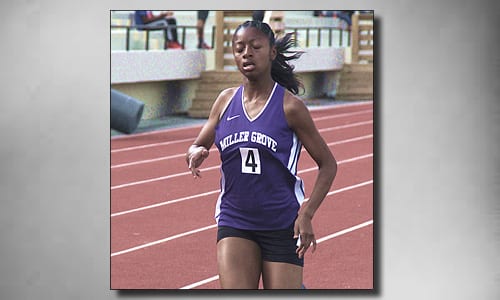 The finals were moved from Monday to today due to the high winds and cool weather. The girls’ 4×100 meter relay gets things started at 4 p.m.

Miller Grove is the defending girls’ champ and has jumped out to an early 50-29 lead over Cedar Grove with two wins and second in the field events and a victory in the 1600 meter run.

Emoni Coleman, the third Miller Grove junior to gold medal on Saturday, ran to the gold in the 1600 meter run with a time of 5:17.35 to win it for the second consecutive year.

Arabia Mountain collected a pair of gold medals on Saturday as junior Patra Williams captured her second consecutive high jump gold at the County Championships with a leap of 5-02.00 and senior Attallah Smith won the long jump (18-03.00).

Southwest DeKalb brought home two gold medals and a silver medal from the first day led by senior Nicholas Edwards victories in the shot put (51-01.50) and discus (155-03.00). Jeffery Hines finished second to Edwards in the discus (133-08.00) for the Panthers’ silver medal.

Junior Coleman White was the leader for Martin Luther King Jr. with the gold in the high jump (6-02.00) for the second consecutive year to aid the third place tally after the first day.

Towers was in fourth with 25 points behind a pair of silver medal winners in seniors Demetrius Jones in the triple jump (43-01.00) and Stephen Harris in the shot put (47-03.00).

Other gold medals on the first day came from McNair junior DeMarshae Travis in the long jump (21-06.50) and Dunwoody’s Max Moorer, a sophomore, who moved up four places from his fifth in the 3200 meter run in 2017 to a gold medal winner (9:55.74) this year.