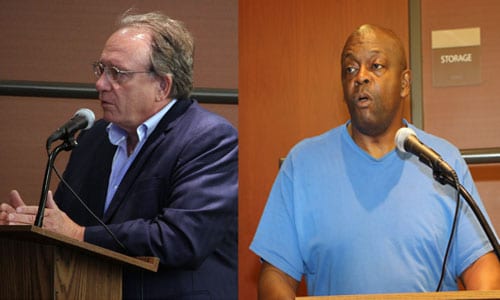 Opponents are urging the Stonecrest City Council to vote no on a proposed millage increase, saying it would unfairly tax owners of commercial and rental properties. No one spoke in favor of the increase at two public hearings held on June 27. About 10 people made comments.

Attorney Bernard Knight, who represents several businesses and landowners in the city, said the proposed increase of up to 1 mill goes against promises made during the formation of the city.

“It was on that basis that the businesses supported the creation of Stonecrest,” said Knight, adding “if you wanted to come up with a strategy that is calculated and drive away prospective businesses which are looking to enter the city of Stonecrest, it would be hard to think of a better way to do it.”

“We are being asked to accept the idea of an increase based at least in part on the credibility of Councilwoman (Jazzmin) Cobble as an accountant. What I would ask for … is a written analysis with calculations stating why. There is nothing in writing from what I can see to justify the increase,” said Knight.

Cobble has expressed concern over the city having enough revenues as it gets off the ground. She said 60 percent of this year’s anticipated $3 million in revenues would go to cover CH2M, the company hired to oversee the city’s administration.

“Principally, the effect would be on those who do not have homestead exemption—primarily commercial and industrial properties,” Harris said.

Harris said the rationale for the increase was to ensure the new city, as it gets off the ground, had a “financial buffer” to cover its expenses. He said the proposed mill could bring in $750,000.

Michael McClinton, who owns a restaurant on Evans Mill Road, said businesses shouldn’t be burdened with the buffer.

“I’ve been in this area for 17 years and I have seen businesses go mainly because of high taxes,” McClinton said.

“They don’t want to put it on residences but the few small businesses that we have here, they’re willing to put it on them. Businesses are moving to Covington and Gwinnett… We’re going to end up a ghost town.”

By law, the city is required to host three public hearings on the proposed millage increase. The third and final hearing will be on Wednesday, July 5, 10 a.m., at the Stonecrest Library, 3123 Klondike Road, Lithonia.

Wednesday, July 5: Final Public Hearing and City Council Meeting, 10 a.m. By law, the city is required to host three public hearings on the proposed millage increase. This will be the third and final hearing and will be held at the Stonecrest Library, 3123 Klondike Road, Lithonia.

City Council members in the newly-formed Stonecrest now have e-mail addresses. Below is their contact information: