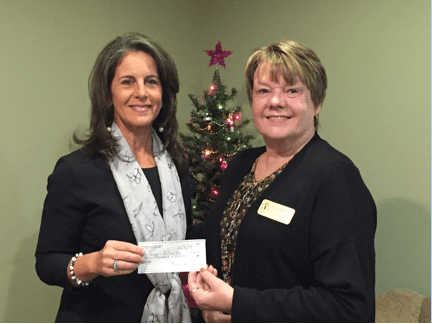 The Race Against Violence (RAV) 5K capped off its 10thAnniversary by making a donation to the local shelter for victims of family violence, Project Renewal.

Judge Nancy Bills of the Rockdale County State Court and chair of the Rockdale County Task Force Against Family Violence, presented Vickie Stevenson, executive director of Project Renewal, with a check for $16,000.  Stevenson said the annual donation is extremely helpful every year with expenses that are not normally covered by grants.

The donation is a result of the  5K run, which was held in October. Nearly 200 participants ran in the cold, rainy morning event. In addition to the runners, the RAV also received support from 76 sponsors who raised nearly $22,000.  This year’s event brings the total raised to approximately $147,000 over 10 years.

Race organizers are already planning for next year’s race, which will be held on Oct. 24, 2020.

For more information about the RAV, visit rockdaleaware.com or contact Derek Marchman at 678-938-5799.