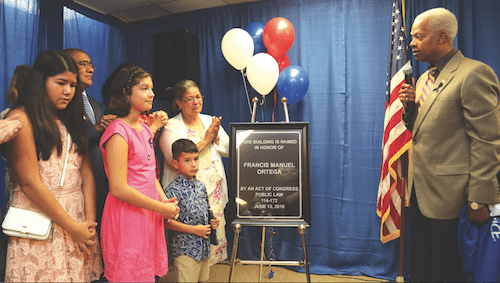 The ceremony was held on Aug. 27 at the Pine Lake Post Office.

Ortega’s family – his parents Francisco and Luz, his sister, Joann, and his children, Frankey and Kaylie, – joined the community for the renaming ceremony. Ortega’s sister Joann joined the rest of her family and the gathered crowd in fighting back tears. She thanked the Congressman and his staff for pushing for the renaming bill to become law so her brother “may be deeply missed but he will never be forgotten.”

The dedication plaque with Officer Ortega’s name is now displayed in the front corridor of the Pine Lake Post Office. The ceremony took shape once Johnson’s bill H.R.3274 renaming the building became law on June 13.

“Officer Ortega’s commitment to justice and willingness to face danger when others turned away, his desire to stand up for what was right – not what was easy, and his compassion for those in need should be applauded, commended and recognized in perpetuity,” said Johnson.