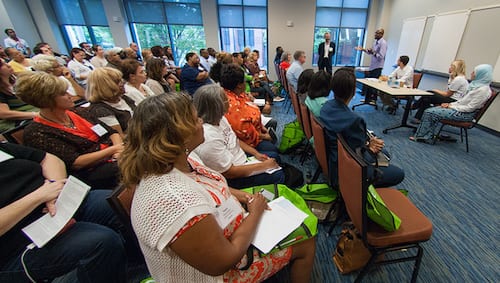 Hundreds of residents met DeKalb County government representatives and learned about services that can improve their quality of life at the Seventh Annual DeKalb Neighborhood Summit, which was held July 9 at Greater Traveler’s Rest Baptist Church in South DeKalb.

“The summit was a valuable opportunity for DeKalb County government, community leaders and residents to meet and share ideas about how to make our county even better,” DeKalb Interim CEO Lee May said. “I was pleased with the turnout, the energy and the dialogue at the summit.”

In light of recent events in Dallas, St. Paul and Baton Rouge, the summit featured DeKalb’s Deputy COO of Public Safety Cedric Alexander, who discussed community-oriented policing during a panel discussion and workshop.

May moderated a panel discussion with Alexander, Fire Chief Darnell Fullum and Director of Beautification Marcus Kellum on the summit’s theme, “Working Together for a Cleaner and Safer DeKalb.”

During the summit, constituents and homeowner associations had the opportunity to obtain details on DeKalb County operations and projects, as well as obtain direct contacts for various county agencies, departments and resources. Attendees also attended workshops on topics such as community-oriented policing, code enforcement, recycling, Zika virus prevention and more.

The summit also featured activities for children, including a bounce house, face painting and giveaways. Additionally, various law enforcement vehicles will be on display for youth.

previousClarkston resident to run as Independent against Rep. Hank Johnson