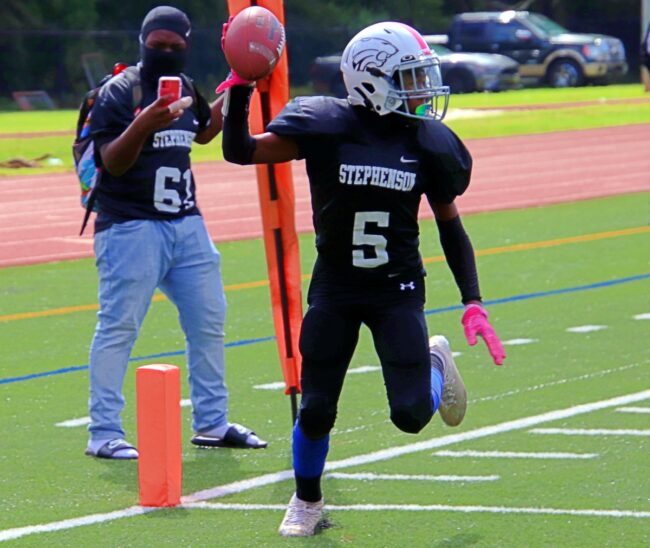 The 2021 DeKalb Middle School Football Trail to the Title Championship is set as Salem and Stephenson won their semifinal round games at Avondale Stadium on Saturday (Oct. 23).
Salem opened the semifinal doubleheader by knocking off Cedar Grove (5-3) 12-0.
CJ Harris got the Lions (8-0) on the board on the opening drive of the game running 45 yards to the end zone to give Salem the early 6-0.
Jaleel Baugh made it 12-0 on a 10-yard scamper early in the second quarter to push the lead out to 12-0 as the teams headed to the half.
Harris and Baugh also came up big on defense with multiple tackles as the Lions pitched their eight consecutive shutout victory on the season.
Stephenson (6-1) led 6-0 at the half and pulled away in the second half for a 22-6 victory over previously undefeated Chapel Hill (6-1-1).
Jerome Johnson had a six-yard touchdown run for the Jaguars and added two second half two-point conversions. Cavalli Jackson ran 17 yards for a touchdown and Jordan Christie returned a punt 47 yards for another score for the Jaguars.
Stephenson’s defense put up five sacks and forced and recovered two fumbles to hold Chapel Hill in check.
The championship final matches Salem and Stephenson for the second time and first time since Stephenson’s 2004 title win in the first year of the playoffs.
Stephenson is making its seventh title appearance and leads DeKalb with five championship trophies (2004, 2005, 2009, 2011, 2016). The only loss in the title game for Stephenson came in 2012 to Lithonia.
Salem is looking to even the championship series with Stephenson at 1-1 with a victory and the Lions’ first title as the two meet on Oct. 30 at 10:00 am at Avondale Stadium.
Mark Brock is the Athletics Specialist for the DeKalb County School District (DCSD).
Post Views: 417