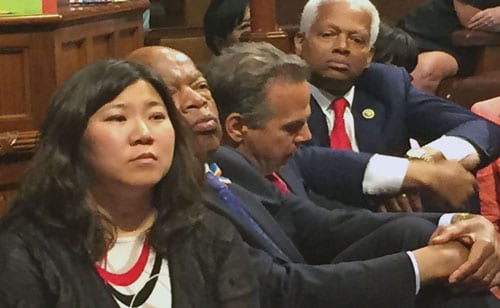 Lewis led more than 200 Democrats, including Congressman Hank Johnson, who represents Georgia’s Fourth District, as they demanded a vote on measures to expand background checks and block gun purchases by some suspected terrorists in the aftermath of the recent massacre in Orlando, Florida where 49 people were shot to death in a gay nightclub.

Lewis and his colleagues—both, men and women dressed in their business suits—sat down at the front of the House floor on June 22, refusing to budge. They kept the pressure on throughout the night in what became a 24-hour protest.

“We have a mission, a mandate, and a moral obligation to speak up and speak out until the House votes to address gun violence,” Lewis posted on Facebook. “We have turned deaf ears to the blood of the innocent and the concern of our nation. We will use nonviolence to fight gun violence and inaction.”

“I’m on the House floor now holding a sit-in with John Lewis & my colleagues until we get a vote on legislation to curb gun violence,” Johnson said in a Facebook post early that afternoon. Johnson was part of a group who stayed all night, some of them bringing in food to share and even passing out toothbrushes.

“Congressman Johnson did not leave and at this point, it doesn’t look like he will be coming home before the Fourth of July. He was scheduled to attend the Congressional Black Caucus up there anyway, but now with all that is going on at the Capitol, we are not expecting him to return to Atlanta any time soon, said Andy Phelan, Johnson’s spokesperson.

The demonstration of civil disobedience was captured live on Periscope and lit up social media as the momentum grew and many Representatives used their cell phones to take pictures, which are technically in violation of a House rules on such devices. The scene, Phelan said, was chaotic at times with Republicans and Democrats yelling at one another as the night wore on.

During a recess around 9:50 p.m., Republican Rep. Louie Gohmert shouted “Radical Islam killed these people,” while pointing to signs with photos of victims that Democrats were holding. Drowning out Gohmert’s voice, Democrats began chanting “No bill, no break,” vowing there would be no July recess without a vote on gun control. The Republicans, however, called the protest a “publicity stunt” and adjourned until after the July 4 holiday.

The sit-in by Democrats was one that harkened back to the Civil Rights demonstrations by black and white college students who endured physical abuse and threats by sitting in “whites only” lunch counters in the South.

Lewis, 76, was among the students who participated in those sit-ins and he revived that form of protest when he called on colleagues at the Capitol to join him in a showdown with Republicans over gun control.

House Republicans have voted 13 times to block consideration of the bipartisan ‘No Fly, No Buy’ legislation aimed at keeping guns out of the hands of suspected terrorists.

“Too many of our children, too many of our sisters and brothers, our mothers and fathers, our friends, our cousins are dying by guns and we have to do something about it,” Lewis told CNN’s Wolf Blitzer in an interview.

Meanwhile, the Democratic Party of Georgia praised Lewis and the other Democratic legislators for staging sit-in on Capitol Hill.

“While we’re disappointed that Republicans in Congress have refused to address the epidemic of gun violence in America, Georgia Democrats are proud of leaders like Congressman Lewis who are willing to take a stand and say enough is enough. A majority of Americans support common-sense reforms, and our communities have greater expectations than what House and Senate Republicans are offering—which is nothing. This is a crisis that must be addressed and inaction is not an option,” said Michael Smith, Communications Director for the Democratic Party of Georgia.

“Calling this a sit-in is a disgrace to Woolworth’s,” Rep. Mark Walker of North Carolina tweeted, referring to the demonstrations held in the 1960s at the department store’s segregated lunch counters. “They sat-in for rights. Dems are ‘sitting-in’ to strip them away.”

Johnson fired back in a Periscope video, saying Republicans were determined not to work with Democrats. He said he was informed by one of his staffers who overheard a Republican representative say “If we give in on this, there will be a lot more problems.”

“They (the Republicans) are looking at this as if this is some kind of game, some kind of ploy,” said Johnson, adding the Democrats would not give up.