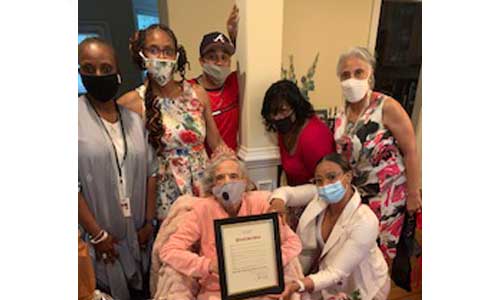 STONECREST—Willie “Willa” Moss celebrated her 100th birthday in pandemic style–wearing a mask and seated in a wheelchair on her porch flanked by masked family members and friends. A drum line and  dancers serenaded the District 5 resident who became a centenarian on April 14. Moss’ daughter, Dr. Felicia Mayfield, hosted the event.

Stonecrest Councilmember Tammy Grimes, who represents residents in District 5, shared in the celebration and presented Moss with a proclamation signed by the Mayor Jason Lary. The proclamation capsules of Moss’ life, declaring April 14, 2021 as “Willa L. Moss Day:”

“Whereas, Willa Moss was the only child born to Mr. and Mrs. Frank and Sammie Parker on April 14, 1921 in Choctaw County Mississippi; and

Whereas, Willa Moss was born Willie Lee Parker, but called herself by a more feminine version; and

Whereas, Willa Moss at a very young age moved to Chicago, Illinois with family members during the great migration; and

Whereas, upon graduation from high school visited her cousin,  Mary “Mamie” Hayes in Memphis, Tennessee met Henry Moss, got married and had four children; and

Whereas, she attended Lemoyne College; and

Whereas, her faith community has been consistent for 80 years at Saint Augustine Catholic Church; and

Whereas,  she worked primarily as a homemaker, but helped out as a teacher, and librarian at Saint Augustine School; and

Whereas, Willa Moss raised, not only her children, but parented many young people in the Memphis area with lessons on wisdom, courage, faith, civic involvement and nutrition; and

Whereas, because of her focus on emotional, physical and spiritual health has been blessed with a long life; and

Whereas, her favorite scripture is “Nothing can separate us from the love of God”  Romans 8:31-39;  and Whereas, she decided to move to the City of Stonecrest to live with her daughter; and

Whereas, she is proud to have seen a President of color; and

Whereas, she has always said that her life span is congruent to the Women’s Suffrage Movement, and derived immense joy in seeing a female of ascend to the office of Vice-President of the United States of America; and