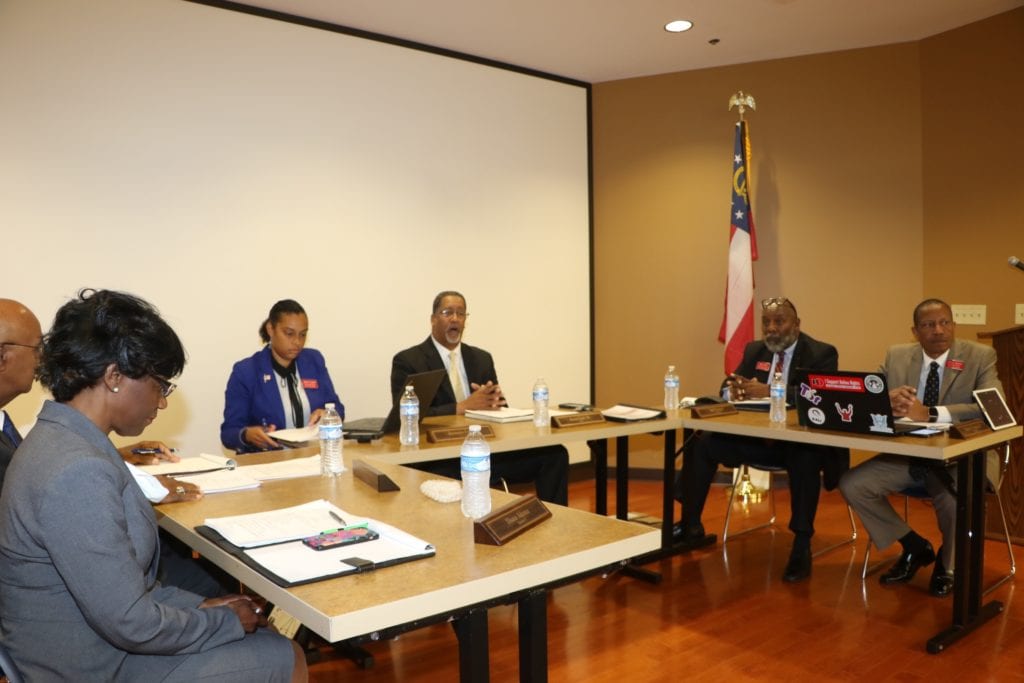 About 100 people attended the city of Stonecrest’s inaugural meeting, which was held this morning (May 8) at the Stonecrest Library. The meeting, conducted by Mayor Jason Larry, started at 9 a.m. and lasted for about an hour with the City Council putting into place the structure needed to begin operations.

Council member Jazzmin Cobble was nominated for the position by Council member Rob Turner. Adoma and Cobble are the only two women on the council.

“I am very excited and I’m delighted the council elected me for the position. As I have said before, I’m ready to work to make sure the citizens are represented and for transparency as we move our city forward,” said Adoma.

In her role as mayor pro tem, Adoma will be responsible for running the meetings and represent the city in the absence of Mayor Jason Lary. Jazzmin Cobble also was nominated for the position. Adoma and Cobble are the only two women on the council.

Joel Thibodeaux, chair of the Governor’s Commission on the City of Stonecrest, provided a summary of the commission’s recommendations to set up structure for the newly-formed city. Highlights included the adoption of DeKalb County’s fee schedule for permits, licenses and other business services for 60 days with the option to extend the fees for an additional 30 days; obtaining a Request for Proposal from CH2M and IBTS to enter into a master contract to oversee the provision of city services; and the development of a comprehensive plan within the first year of operation to address development. The summary of the 10-page report also included three recommendations for the location of a City Hall:

The commission recommended that the city establish its Municipal Court as soon as possible to reap the benefit of any fines or monetary penalties from code violations, traffic citations or other legally imposed sanctions. A municipal court judge, judge pro tem and municipal clerk should be hired, the commission said.

During the Public Comments portion of the meeting, Faye Coffield, a community activist who ran unsuccessfully for the Stonecrest City Council, expressed that she would like to see the City Council meetings held in the evenings to allow residents who work during the day the opportunity to attend.

The City Council, however, held a work session last week and set the dates and times for the meetings to be held on the first and third Mondays at 10 a.m. at the Stonecrest Library. The council’s work sessions will be held on the first and third Wednesdays at 5 p.m. at the library until a location for a City Hall is established. The meetings are open to the public. Photos by Glenn Morgan