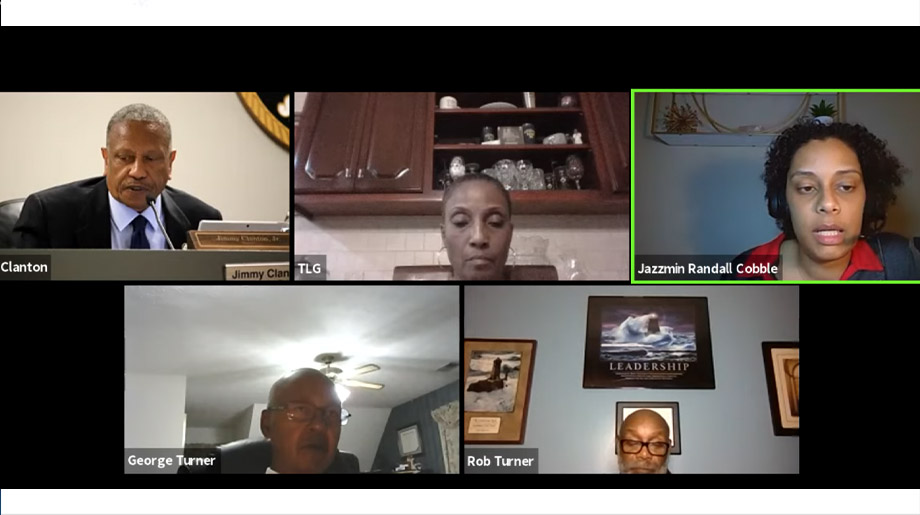 Mayor Jason Lary: “This is a power grab from the citizens by four people.”

STONECREST–Around 1 a.m. today as the City Council’s meeting was coming to a close, four Stonecrest City Council members approved a resolution to support a controversial state Senate Bill to make changes to the city’s charter.

Councilwoman Jazzmin Cobble led the move, requesting to add an item to the agenda. She said the item would likely wake up those who had held on until the end of the marathon virtual meeting, which lasted nearly seven hours. The audience of over 100 people had dwindled to about 10 when Cobble made a motion around 12:50 a.m. to add the resolution to the agenda for a vote. Council member Rob Turner seconded Cobble’s motion.

“… This will probably wake everyone up who has fallen asleep. So get ready: I’m gonna ask to provide support to the Stonecrest Delegation to support SB 21, which makes changes to our charter….,” said Cobble. “… I know that it has been a provocative topic of discussion for many years. So I am the first to say that we have battled back and forth with where the charter sits today, changes that need to be made and there’s opinions that go both ways and that’s understood, acceptable and appreciated.”

Council members George Turner, Rob Turner, Tammy Grimes approved the resolution, with Council member Jimmy Clanton dissenting. Mayor Jason Lary was not present for the vote.  Lary had long left the meeting, turning it over to George Turner, who is mayor pro tem.

“Today(March 22) is my birthday and I’m not going to be here until midnight,” said Lary, who had announced earlier in the meeting that he had returned after receiving new information last week from doctors concerning his battle with cancer.

Clanton stated that he opposed supporting the resolution because voters had not had any say in changing the charter in the form of a referendum. He called the council’s move to support SB21 “philosophically wrong,” and likened the lack of a referendum to voter suppression.  Clanton also expressed his disagreement with the way the resolution was added to the agenda, pointing out the resolution was “slipped on” to the meeting’s agenda late night after most of the audience was no longer watching the virtual meeting. Clanton said the City Council’s action was similar to the DeKalb County Board of Commissioners’ move to increase their own salaries during a late-night meeting.

The Board of Commissioners voted to give themselves a salary increase of nearly 60 percent—from $40,530 to $64,637 a year—in February 2018 after most of the audience had left the meeting. The measure was passed without the normal committee review process or being included on the board’s agenda. Community watchdog Ed Williams sued the board over its decision.

Clanton said the City Council’s measure was “slipped on” to the agenda late at night the same as the measure supporting the Board of Commissioners’ increase in salaries. Cobble, however, disagreed with that assessment, saying that the City Council voted to add the agenda.

“Our citizens voted for this charter and they should certainly have some input into whether or not we change our charter,” Clanton said.  “Our charter provides for a commission to be established that would do exactly that—that would bring citizens to the table to talk about whatever changes we want to the charter. “

Cobble said Stonecrest citizens were aware of attempts to change the charter. She said SB21 is a “reincarnation” of SB 469 and SB422, which did not make it out of the 2020 legislative session, which ended early due to the COVID-19 pandemic.

“There was an opportunity for constituents to attend the town hall meeting that legislators held and also be a part of the process for that change up until COVID hit and it(the 2020 Legislative Session) was cut short…,” said Cobble. “It(SB-21) is not brand spanking new to our community. It is just reincarnated from last session.”

Mayor Lary said in an interview with On Common Ground News at 8:30 a.m. today that the town hall meeting Cobble was referring to was held in March 2020.

“There were not a lot of people at that meeting. The citizens, as a whole, have not had their say. We have 54,500 citizens in the city of Stonecrest and the majority of them do not know that four people  have gotten together with Senator Emmanuel Jones to try and change the  charter,” said Lary. “This is changing the form of government. When the citizens voted to have their own city, the charter came along with it. This completely changes the form of government to one that is council-led and filled with bureaucracy. Four people are holding the citizens hostage to their desires. This is not the will of the people. This is a power grab from the citizens by four people.”

Stonecrest citizens voiced outrage over the bill to change the city charter at the town hall held in March 2020. Below is a news story that was published in On Common Ground News regarding a citizens’ petition to kill the bill:

Story developing. Check back for more.