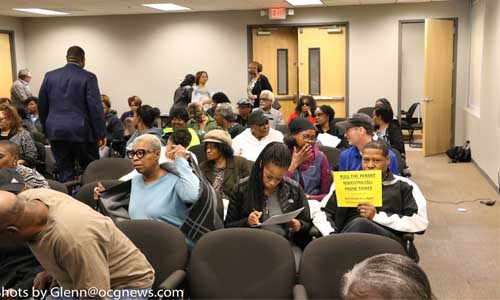 The bickering among the Stonecrest City Council reached a new plateau on Monday night as council members voted 5-1 to authorize City Attorney Winston Denmark to draft a 60-day moratorium on the construction of cell phone towers in the city.

Lary called city officials, the city attorney and Attorney Dwight Thomas. For every action, there is a reaction. Because I don’t want the same people to coe

Councilwoman Diane Adoma, who had asked to put the moratorium resolution on the council’s agenda, suggested that the moratorium could be for “30,60 or 90 days or even sooner, depending on when we flush out the legalities.” However, Adoma said she cast the dissenting vote for the moratorium because she wanted the city to immediately stop any special administrative permits, especially those for cell towers. She said the city should place such applications in a “pending mode” while the attorney is drafting the moratorium documents. Adoma said she has been hearing that another cell tower might be constructed in Stonecrest and she wants the city to put the brakes on such development to make sure residents have an opportunity to voice their opinions.

“Surely things can sit in a pending mode until you put that (moratorium) together,” Adoma said.

Denmark disagreed, saying by law, a moratorium could not be enforced until the document is written.

Denmark said the moratorium would be consistent with federal law.

“As you know, we do not have a free hand when it comes to federal law… We have to craft our legislation within a broader federal framework,” Denmark said.

Councilmember Jimmy Clanton agreed with Denmark, and a raucous exchange with Adoma ensued.

“We can’t have a moratorium until we know what it is. You’re just asking for a blank check,” Clanton shouted.

The mayor intervened as Adoma fired back, demanding 10 minutes to speak, citing Robert’s Rules of Order. Lary told the city attorney he could answer one more question. Adoma snapped back, insisting she had the floor and demanding that the city clerk record how much time she had left to make her remarks. The mayor moved forward and the council voted 5-1, authorizing the attorney to draft the moratorium.

Denmark said the draft would be prepared well ahead of the next scheduled City Council meeting on March 25 so that the council could review the document and be prepared to vote on it.