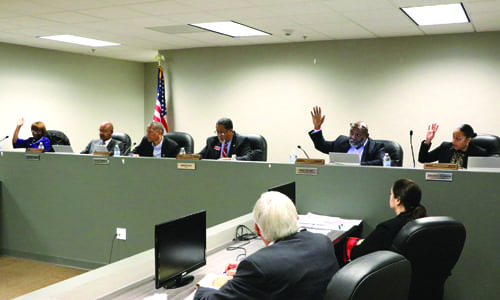 The city of Stonecrest has hit a snag in conducting an analysis of its roadways—the preliminary work that is needed for the city’s Special Purpose Local Option Sales Tax (SPLOST) transportation projects that will get underway.

The City Council deadlocked on Stantec Consulting’s proposal to provide a detailed analysis of the city’s roads, after council members raised a number of questions at the Feb. 7 special called meeting. The council questioned how the firm’s work would fit into the city’s overall SPLOST projects plan and ultimately, the motion failed 3-3.

City officials said they now must go back to the drawing board to figure out how they will get the analysis of the roads done.

Stantec had proposed conducting the analysis at a cost of $69,550. Company officials tentatively proposed starting the work on Feb. 5 and finishing by April 27. Stantec said it was offering a discount because it was in the area completing an analysis in Tucker. Assistant City Manager Plez Joyner said the costs would increase once Stantec left the area.

Infrastructure Management Services (IMS) proposed doing the analysis at a cost of $114,933.

City Attorney Tom Kurrie said Grice’s agreement, which was signed on Aug. 1, included four phases but did not include a detailed scope of the work that would be performed. Kurrie said after the city received Grice’s initial invoice of $161,000, the city decided to modify the contract and selected Stantec to do the road analysis.

“As I looked at the contract, it said here’s what we’ll do and how much it would cost but it did not give any specifics,” said Kurrie, adding it was “unacceptable.”

Kurrie said Grice initially worked on identifying a list of SPLOST projects for the voter referendum and conducted community presentations to inform the public about SPLOST. Kurrie said city officials worked out a recent agreement to pay Grice $40,000 for the work.

In other action, Monty Hill, Kerry Caldwell, and Josh Reed were sworn in by Mayor Jason Lary as the city’s building and development officers.

A second public reading for the City Communications Policy was also completed so that it becomes an ordinance. The council voted unanimously to adopt the policy.

nextFocusing on Men: DeKalb Board of Health to offer men free preventive care