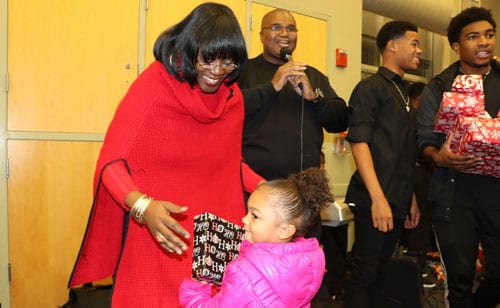 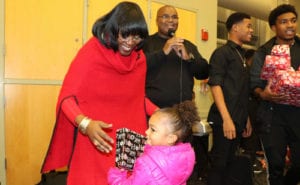 LAWRENCEVILLE—The Rhodes Jordan Park Community Center was filled with tears and cheers. As the names were called, dozens of little children beamed as they came forward, happy to get not one but several gifts. The kids gave big hugs to Dr. Gayle S. Daniels, founder of Words of Comfort Ministries, Inc. (WOC), as she presented the gifts, some of them bicycles and packages too big for them to carry during the Dec. 17 pre-Christmas event.

Daniels said she and her army of volunteers were able to be a blessing to the children because of an outpouring of support from donors throughout the community. Before the presents were presented, the ministry served a holiday dinner complete with all of the trimmings including barbecue ribs, turkey, chicken, dressing, collard greens, string bean casserole, macaroni and cheese and other sides and desserts for the families attended the event.

“When people heard what we were doing in the community, they began to give. We received toys and boxes of food for the families to take home including a ham and a turkey,” said Daniels.

Since 2011, over 35 families and appropriately 75 children have participated in the ministry’s Adopt-A-Family Program.  This year, the program served 10 families and nearly 30 children. Although the nonprofit is based in Gwinnett County, it adopts families from Gwinnett, Rockdale and other Metro Atlanta areas who are referred to the ministry, Daniels said.

Daniels founded Words of Faith Ministry in 2005 as a way to reach and be a resource to families that have difficulties tackling the day-to-day life challenges.

“We strive to bring hope and encouragement to individuals and the lives of families as a whole through key community partnerships.  I believe no matter how dark it gets, there is allows a glitter of hope through God and those willing to serve the less fortunate,” Daniels said.

A grateful young father who thanked Daniels and her ministry became emotional as he shared his testimony of feeling overwhelmed at times in raising his young son. He said he had a tough week: He was on his way to pick up the child from daycare when he had a flat tire and was trying to figure out how to get there with the time ticking by and late fees being assessed. Fighting back tears, he told Daniels he had hope that Christmas would be brighter when he learned that he and his family had been adopted.

Before creating the Adopt-A-Family Program, WOC was serving area shelters for the holidays, feeding and providing gifts during Thanksgiving and Christmas.

“We were being charged fees to use kitchen facilities; even though we were providing the food.  In some cases, many children and families would not show up,” said Daniels.  “Additionally, gifts could only be distributed by shelter personnel and not WOC.  As a result, the board of Directors and I decided to start this program where our limited resources could be better utilized with a more direct impact,” Daniels said.

As a result, some parents have joined Words of Comfort Ministries as volunteers and some even provide regular monetary donations and give testimonies on the impact the program has had on their life, Daniels said.

The Adopt-A-Family Program is specifically designed for WOC to demonstrate the love of Christ to those less fortunate, Daniels said.

“Our success is attributed to a seven-member board of directors, nearly 30 WOC volunteers, and community partners such as Toy for Tots, Wells Fargo, Constellation And Exelon Company, Berean Christian Church, A Kids Dream, Heart Strong Church and many more,” Daniels said.