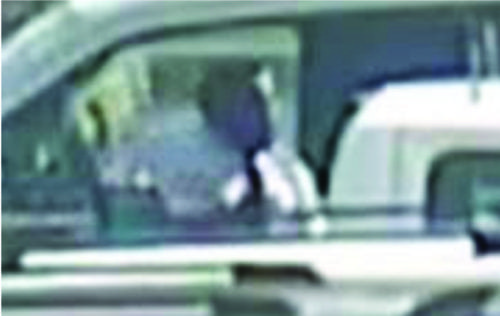 CONYERS—He looks like a businessman. But Conyers police say don’t be fooled by the shirt and tie. That’s just part of his MO. The dressed-up suspect has been breaking into parked vehicles right in the open. He hit several vehicles at Longhorn steakhouse in Conyers during lunch and dinner between Jan. 5-16.

“He’s very brazen. He set the alarm off in one vehicle and that didn’t stop him. He continued going through the belongings inside,” said Conyers Police Sgt. Kim Lucas, who said police are examining video surveillance from the restaurant showing the suspect.

Lucas said the suspect has taken electronics and firearms left inside the vehicles he has burglarized.

“He uses some kind of punching device so no windows are shattered. Some of the victims don’t even realize their cars have been broken into until after they drive off and spot things missing,” Lucas said. “He parks and then he just goes about breaking into cars while the patrons are inside eating.”

The thief is described as a black male, medium to heavy set, pear shaped, low Afro, goatee, wearing a shirt and tie. He is driving a clean gray/silver 2010-2012 Volkswagen CC or Passat CC.

A $4,000 reward is being offered for tips leading to the suspect’s arrest. Any information should be sent to Crime Stoppers Greater Atlanta. The tipster will remain anonymous. For more information, call: 404-577-TIPS.

To see a video of the actual incidents, go to YouTube: https://youtu.be/flhwg1IQzvM.