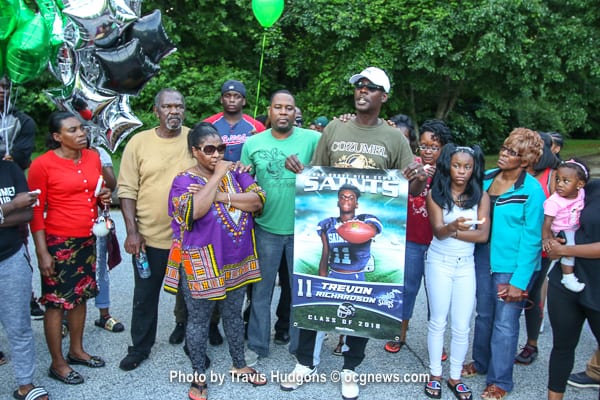 By Travis Hudgons and Valerie Morgan

Dozens of balloons were released as a South DeKalb County community gathered to remember 18-year-old Trevon Richardson. Hundreds of friends, teachers and teammates joined Richardson’s family members at a candlelight vigil that filled an entire cul-de-sac in Richardson’s Ellenwood community on May 30.

Richardson, a football and track standout at Cedar Grove High School, graduated on May 24.  Four days later, on Memorial Day, DeKalb Police found Richardson’s body lying in the parking lot of The Life at Peppertree Circle Apartments in Decatur around 9 p.m. Police arrested 18-year-old Detavion McDay on May 31 and charged him with murder in connection with his Trevon’s death, according to DeKalb police spokeswoman Shiera Campbell.

Trevon’s parents, Freddie and Nicole Richardson, struggled to express their grief. In less than a week, they went from celebrating the high school graduation of their youngest son to mourning his tragic death. Trevon was set to attend Valdosta State University in the fall

“Every time there’s a graduation, someone gets killed or goes to jail,” Freddie Richardson said.

“My body is numb—it hasn’t registered yet,” Trevon’s mother said. “It didn’t have to be that way.”

Four teens have been killed as a result of gun violence since the school year ended in May.

Joshua Torrance, who was a star athlete on the fencing team at The B.E.S.T. Academy in Atlanta, was shot in the back on May 27, three days after graduating. He was reportedly walking away from an argument when he was killed in the 2400 block of MLK Jr. in the apartment complex where he lived. Torrance was set to attend Albany State University.

In the city of South Fulton, 16-year-old Grant Antonio Payton and 19-year-old Tyree Johnson were shot to death, and a 15-year-old male suffered a gunshot wound to his face. He survived.

There has been an outpouring of condolences for Trevon Richardson on social media with those who knew Trevon using the hashtag #LLT (Long Live Trey).

“He was a great kid,” said Cedar Grove Head Football Coach Jermaine Smith, while speaking about Trevon’s personality. “A comedian. He always had a joke—always tried to put a smile on others face.”

“He didn’t want to hurt anyone. All he wanted to be was happy,” said former teammate Justin Shaffer. “My last time talking to him was Saturday and I told him be safe—I love you, bro.”