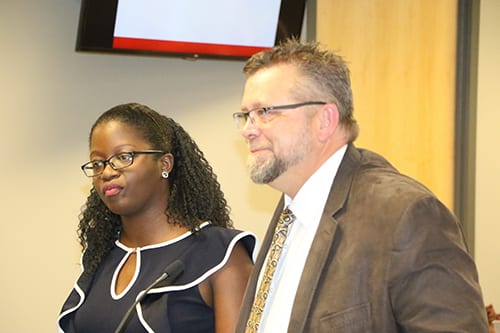 The Stonecrest City Council on Monday (Oct. 16) approved the annexation and rezoning of 11.63 acres at 6024 Covington Highway to MR-R2 (medium density residential) for a mixed-use development that would include a 160-unit townhome development.

The council’s approval paved the way for Halpern Enterprises to bring its 24-acre parcel, which was split by the City of Stonecrest boundary, in its entirety into the city.

The site was originally two parcels and was part of a plan for a large mixed-use project involving Halpern Enterprises, DeKalb Hospital Authority and Sunstate International, city officials said.

Halpern is working with Rocklyn Homes to build a townhomes development at the site and add commercial development in the future. The townhomes will start at about 1,800 square feet and have a price point of about $220,000, according to the applicants.

Jan Costello, president of the Greater Hidden Hills Community Development Corp., said during the public hearing at Monday’s meeting that the Hidden Hills community was pleased with the negotiations with Halpern Enterprises and Rocklyn Homes.

“We want to thank Halpern Enterprises and Rockland Homes for coming to the table and agreeing to the park, benches, a walking trail around the community, a 30-foot buffer, and all of the landscaping and tree plantings,” said Costello, adding that Hidden Hills supported the 24 conditions Halpern and Rockland Homes recommended in its rezoning application.

The conditions included installing an opaque 8-foot fence along the interior of the eastern boundary of the property adjacent to the townhomes and other beautification efforts. The applicants also agreed that the front and sides of the townhomes would be predominately brick. The conditions further stipulate that no self-storage facilities, mini warehouses, liquor stores, pawn shops, pool halls and sports bars, adult entertainment or adult bookstores, check cashing, nightclubs, skating rink and indoor and outdoor recreation would be permitted.