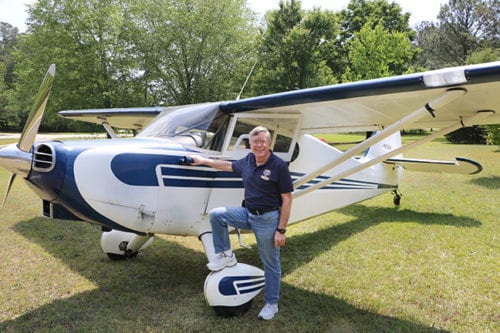 I had no idea when I woke up May 10 I would be flying a plane. It was a regular day and as I headed to my interview, I thought about what I might ask a retired pilot. When I arrived at my subject’s home, I was amazed to find a plane parked in the yard. Before I had time to process how the plane got there, my dad, Glenn Morgan, who is publisher of On Common Ground News, and I were greeted by the plane’s owner, Charles “Chuck” Roberts.

Roberts, who will celebrate his 74th birthday in June, recently completed his 300th mission as a retired aviator as part of the EAA’s “Young Eagles” program. Founded in 1992, the Young Eagles mission is to inspire the next generation of aviators by providing free demonstration airplane rides to youths ages 8–17.

We were eager and honored to meet Roberts and tell his story to our community.

Roberts lives in a gated “fly-in community,” or airpark. All of the residents in his community share a main runway, forming their very own mini airport. As you enter the community, the main drive doubles as a taxiway where airplanes have the right-of-way since they don’t have the ability to reverse. When not in use, residents park their planes on their property in a hangar, which is essentially a garage for an airplane. After giving us a brief history of his plane, Roberts invited us into his home to talk about how he got into aviation and his involvement with the Experimental Aircraft Association (EAA)’s “Young Eagles” program.

“I was born and raised in aviation. I caught the flight bug as a child and I always wanted to be a pilot, but my actual background is in computer science and engineering,” Roberts said.

Born into a family of aviators, Roberts’ paternal grandmother was a commercial pilot and flight instructor; his father was an Army Air Corps (Air Force) fighter pilot and Pearl Harbor survivor and his older brother was a career army pilot who did two tours in Vietnam.  Although Roberts was surrounded by planes as a youth, he didn’t get licensed until age 33 when an opportunity presented itself while working as an engineer for an aviation radio manufacturer.

The retired aviator said that he loves inspiring kids to take an interest in STEM-related careers including aviation. He said flying is an attractive way to get kids curious in the STEM field, even if they don’t necessarily become pilots.

Roberts is part of a network of more than 50,000 volunteers from around the world who enjoy recreational flight and dedicate their time and aircraft to the effort. Pilots in the Young Eagles program explain the safe operation of airplanes and principles of flight before the short trips and participants become official Young Eagles. The names of the pilots and the participants are also included in the “World’s Largest Logbook,” which is on permanent display in the EAA AirVenture Museum in Oshkosh, Wisconsin and online through the Young Eagles’ website. As of May 14, 2018, the Young Eagles program has flown 2,090,238 kids between the ages of 8 and 17, according to the EAA’s website.

After the interview, Roberts offered to take us out for a fly in his 1947 Stinson 108-1, the same model he grew up riding in as a boy alongside his grandmother. How could we say no? Getting in the plane was a breeze for me, but not for my 6’4-foot-tall dad. After maneuvering his way into the backseat of the small aircraft, we were provided a special pair of protective earphones, which enabled us to communicate with one another as well as hear real-time air traffic control broadcasts. Once safety belts were secure, we taxied down the driveway onto the main road and over to the runway. Once we reached the end of the runway, our pilot performed a final checklist and we throttled down the runway at top speed propelling us into the air.

I watched Conyers disappear into tiny of patches of brown and green land and gray asphalt. It was exhilarating to say the least. In just a few short minutes, I could see Lenora Park in Gwinnett County, historic Stone Mountain and the Rockdale reservoir at Randy Poynter Lake. I quickly discovered that flying is electrifying. Our guide turned the wheel over to me. I mashed down on the pedal and turned the control yolk (steering wheel)  left and then right, soaring through the blue sky right alongside the birds. I never imagined a little black girl from Stone Mountain, Georgia with a degree in journalism would be flying a plane. It just doesn’t happen every day –  especially on deadline. I gave the wheel back to Roberts and soaked up the rest of the experience by taking in all of the views.

Roberts says he still gets a thrill from flying planes after becoming a licensed pilot over four decades ago.

“Flying solo for the first time borders on a religious experience. Almost every pilot will tell you that you never lose the thrill of taking off. When you climb out away from the world and the world drops away from you, there’s always a thrill in that – you never get over that feeling.”

Roberts said it is this feeling he wishes to share with young people in hopes of sparking more interest in aviation.

“I’m not a pilot, but I like to go,” said Mrs. Roberts, who enjoys accompanying her husband on flights.

“I just think it’s very unique and it’s not something everybody does so it kind of gives kids something special. It’s something they have to work towards and I think when you work towards something you value it more. When they accomplish becoming a pilot or airplane mechanic, they’ve really earned their wings,” said Mrs. Roberts.

EAA Chapter 690 is offering an immersive aviation-focused STEM program at the chapter hangar at the Gwinnett County Airport in Lawrenceville.  The camp runs June 11-15 with a free Young Eagles flight on Saturday, June 16. Topics covered in the weeklong camp include aircraft construction methods, principles of aeronautics, R/C modeling, helicopter flight, ground and flight instruction and visits to select facilities located at Briscoe Field. Students in 7th through 12th grades may apply.

For more information about the summer camp, visit www.eaa690.org. To learn more about the Young Eagles program, visit www.youngeagles.org.

previousOP/ED: The Race for Public Service Commissioner – Why It Matters to You