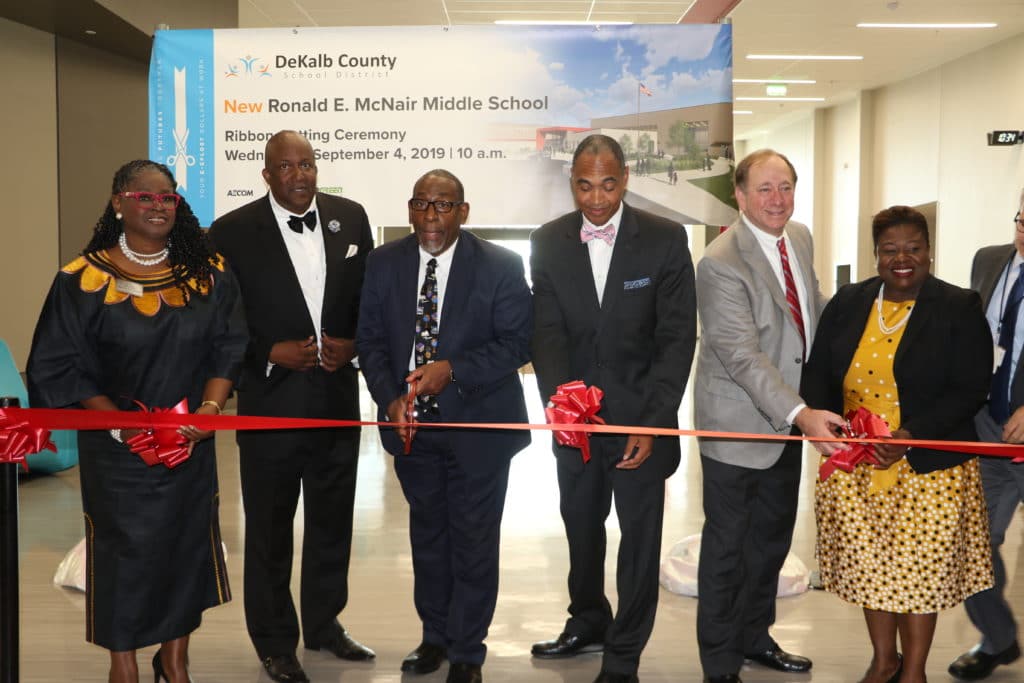 DeKalb County School District officially welcomed the community to the unveiling of its newest edifice – the new Ronald E. McNair Middle School. Located at 2190 Wallingford Drive in Decatur, the school is the first of its kind in DeKalb and features a modern architectural design and cool, sleek interiors.

“This is a game changer. The people that come in this building have a new attitude because this is theirs. This is something they longed for and something that has been needed. Once you set expectations, kids will follow,” said Mitchell.

Mitchell, said while the school has faced some adversity in the past, it has undergone a major makeover, inside and out – from the fresh architectural design to its academic course load,  which exposes the student body to ample opportunities to take more STEM and academically rigorous classes.

“The school is meticulously designed to inspire critical and creative thinking for our students at this transitional age. We hope this new building inspires students to learn in new ways through their classrooms, the layout, technology and specialized equipment,” said Board of Education Chairman Erwin.

McNair welcomed its first generation of students on Aug. 5, after breaking ground December 2017.

The school features an open environment where students can engage socially and collaboratively. Classrooms and hallways feature group learning spaces, large windows, and mobile furniture designed to facilitate discussion between teachers and students.

The 1,200-seat school’s design reflects the district’s strategic plan to develop sites that engage students in learning. The concept is a significant change from a traditional teacher-centric environment to one designed for dynamic, personalized learning.

The school also features large communal learning spaces to further engage with students and expand learning outside the classroom. The school utilizes intentional use of color and had a courtyard area, garage-style doors, murals, an indoor amphitheater and even walls and desks that allow for students to write on them to catalyze creativity and inspire innovation.

“The 21st century demands a 21st-century learning environment, and the new Ronald E. McNair Middle School is meeting that demand every day,” said Superintendent Green. “This beautiful and bright campus is showing the McNair Middle School community that the district values its contributions to society at large. This school has transformed into a beacon of learning, ushering in a new era of education for DeKalb County students. This is just the first of many great things to come for students and staff at DeKalb County School District.”