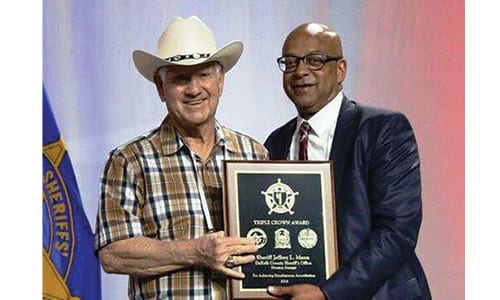 At the annual conference of the National Sheriff’s Association (NSA) in New Orleans, DeKalb County Sheriff Jeffrey L. Mann accepted the agency’s second NSA Triple Crown Accreditation award. It is an honor within the law enforcement profession that is shared by only 16 other sheriff’s offices in the United States.

“Achieving these accreditations individually is a daunting task,” the NSA states on its website. “Acquiring all three at the same time is an extraordinary feat. In fact, the Triple Crown distinction is so rare that since the establishment of the award in 1993, fewer than 100 sheriffs’ offices have qualified.” Of the 3,063 sheriff’s offices nationwide, only 62 have ever earned this distinction.  The agency’s first NSA Triple Crown was awarded in 2008.

In a 2016 proclamation by the DeKalb County Board of Commissioners, the DeKalb County Sheriff’s Office was acknowledged for “meeting the highest standards of professional management, performance accountability, and operational integrity set by industry-recognized accrediting organizations.”

“Our pursuit of excellence and professionalism is unwavering,” says Sheriff Mann. “We will not fail in our commitment to DeKalb County citizens, who deserve no less than our best.”

previousElection results from key races in DeKalb and Rockdale Counties