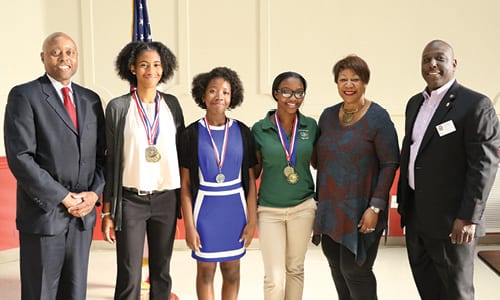 DeKalb County Superior Court Judge Courtney Johnson, who served as the keynote speaker, encouraged the students to immerse themselves in literacy, sharing that effective communication is a necessary tool that would help them in their career paths.

Johnson told the students that her love for literacy helped her to find “her voice” and led her to the career path that she enjoys today. She said she learned persuasive communication through reading—tools  that she needed as an attorney in presenting closing arguments early in her career and tools she now uses  as a judge.

“As a young girl, one of my most favorite things to do was to read a good book or visit the library on the weekend to pick out books. My library was the Scott-Library on Candler Road,” said Johnson, who said she was an introvert who was quiet and shy as a child.

After Johnson spoke, the Rotary Club of South DeKalb presented $17,000 in awards to the students and their teachers.

The awards program, open to high school students in grades 9-12, asks students to write about their life experiences and values such as loyalty, generosity,  compassion and courage.

The Rotary Club of South DeKalb presented $17,000 in awards to the following students at Arabia Mountain High School in the city of Stonecrest and their teachers:

nextDeKalb community leader David Manuel thankful for organ donor, encourages others to give the gift of life