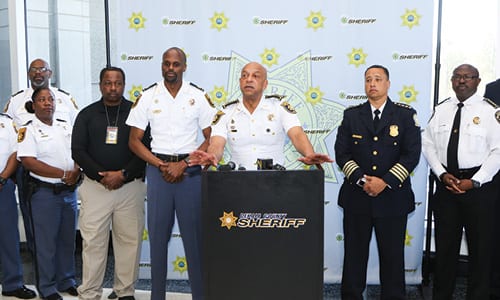 Approximately 300 inmates at the DeKalb County Jail are being relocated to neighboring jails in Rockdale, Fulton and Clayton counties as work begins to repair moldy, leaky shower units in inmate housing.

DeKalb County Sheriff Jeffery L. Mann announced at an April 5 press conference that a major construction project, “Operation Clean Jail 2018,” will begin April 9. Mann said the project is expected to last three months with an estimated $1.5 million minimum cost. Construction will begin immediately, even though the cost of the unbudgeted expense has yet to be approved by county commissioners.

“This is essential for the ongoing health and safety of our staff and inmates,” said Mann.

The project will cover shower repairs, mold remediation and rebuilding of affected areas.

Rockdale County Sheriff Eric Levett, who was among the county sheriffs and jail officials attending the press conference, said temporarily housing some of DeKalb’s inmates for up to 30 days as Mann requested would not pose a problem.

“It’s a routine thing where we house inmates from other facilities for various reasons,” said Levett, adding the inmates will be housed in their own unit and staff from DeKalb County Jail will be supervising them.

Mann said that “Operation Clean Jail 2018” is a major undertaking for the 23-year-old complex and that he wanted to move “swiftly” to address the problem before it got worse.

Mann said that construction would not interfere with the normal jail operations or with court transportations. Affected inmates, he said, will still be able to receive video visitation and make phone calls.

previousBill dies: Rockdale’s BOC will not expand to five seats