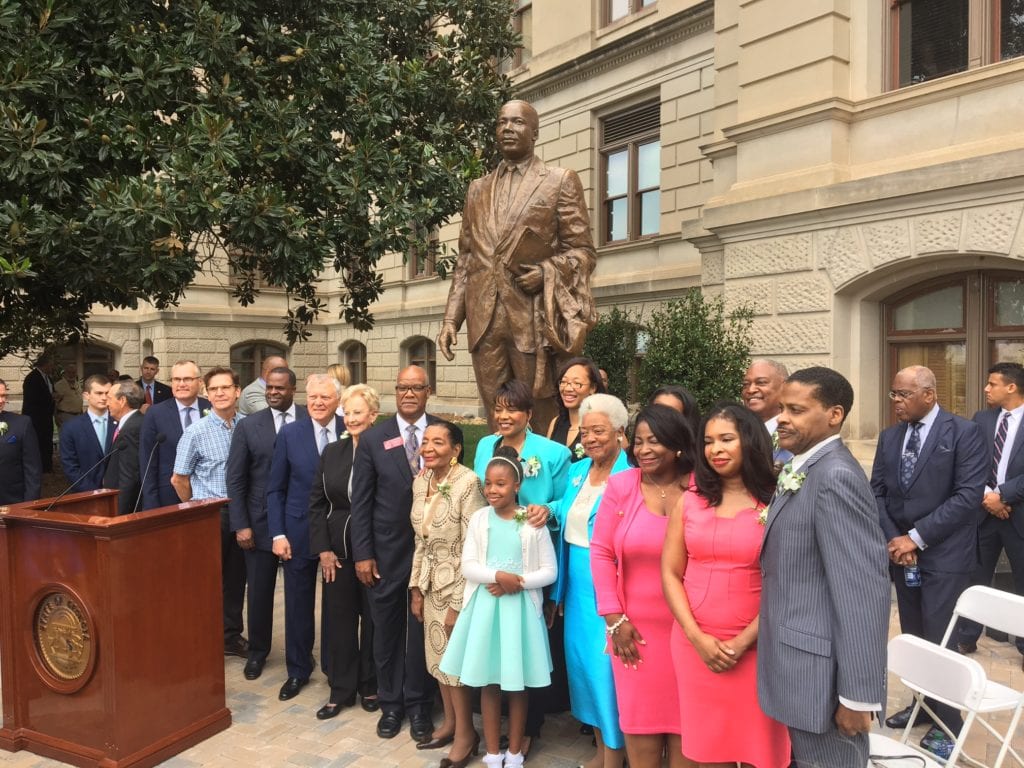 Gov. Nathan Deal, joined by First Lady Sandra Deal, members of the King family, Atlanta Mayor Kasim Reed, and other dignitaries,  on Monday unveiled the Dr. Martin Luther King Jr. statue at the northeast quadrant of the State Capitol. The eight-foot-tall bronze statue was created with locally sourced materials by Atlanta-based sculptor Martin Dawe of Cherrylion Studios and stands atop a 36-inch pedestal made of Georgia granite.

“We are gathered here today to celebrate the completion of a years-long effort to commemorate the life and works of Georgia’s own son, Dr. Martin Luther King Jr.,” said Deal.

“Dr. King’s legacy is one of hope. He gave, and continues to give, men and women a reason to believe and to dream. He expanded the aspirations of future generations. The America we know is a better place because one man followed his conscience. Erecting a monument in his memory, both facing Liberty Plaza and on the grounds of the Capitol of his home state, is a fitting and long overdue honor. Today is a historic occasion, one made possible through the vision, cooperation and collaboration of many. I’m grateful for the dedication and support of the King Estate, Rep. Calvin Smyre, the Georgia Capitol Arts Standards Commission and members of the General Assembly throughout this process. I’m also deeply grateful to Coca-Cola, the Atlanta and Georgia Apartment Associations and the Martin Luther King Jr. Advisory Council for their generous support, without which today would not be possible. Dr. King’s legacy will indeed live on with this tribute, and it’s a privilege to unveil his statue today.”

The project was initiated in April 2014 when Deal signed into law HB 1080, legislation authorizing the placement of a statue honoring Dr. King at the State Capitol. The project was led by CASC, which undertook the statue’s design and fundraising efforts, and overseen by the Georgia Department of Community Affairs under Deal’s leadership. Sponsors of the statue include Coca-Cola, the Atlanta and Georgia Apartment Associations and the Martin Luther King Jr. Advisory Council. The remaining funds needed were made possible through the sale of state bonds.

“I am proud to welcome this new monument memorializing Dr. Martin Luther King, Jr. to his birthplace and the cradle of the Civil Rights Movement, where every building, street and monument bearing his name should stand as a source of pride and excellence for our city,” said Reed.

“The statue we unveiled today pays tribute to Dr. King’s character and legacy. This memorial tells another part of our great state’s story and makes an important statement about the value of inclusion, the strength of diversity, and the power of grace. I would like to thank Governor Nathan Deal, the Georgia General Assembly, Representative Calvin Smyre and the Georgia Capitol Arts Standards Commission for their commitment to ensuring that our Capitol honors the legacy of one of our state’s most important leaders.”

In March 2015, Deal signed an executive order authorizing Smyre, a CASC board member, to act as a liaison between the state, members of the King family, the Martin Luther King Jr. Advisory Council and CASC throughout the project. Deal and the commission’s selection committee announced that Dawe had been selected to create the statue in June 2016.

“This is a great day in the history of our state and nation with the unveiling of a statue on Capitol grounds memorializing Dr. Martin Luther King, Jr.,” said Smyre. “For the past three years I have worked with and alongside Gov. Deal, the Georgia General Assembly, Carrie Ashbee and the Georgia Capitol Arts Standards Commission, the King family, sculptor Martin Dawe and our entire statue team to make this a reality. As a Georgian and native son, Dr. King inspired our nation and the world with his message and vision. The King statue will inspire and give hope to generations to come.”

The Dr. King statue stands in the original location of Georgia’s Liberty Bell replica, which rang on Capitol grounds for special and patriotic occasions from 1950 until 1976 and is now located in Liberty Plaza.

Footage of the ceremony is available from Georgia Public Broadcasting here.