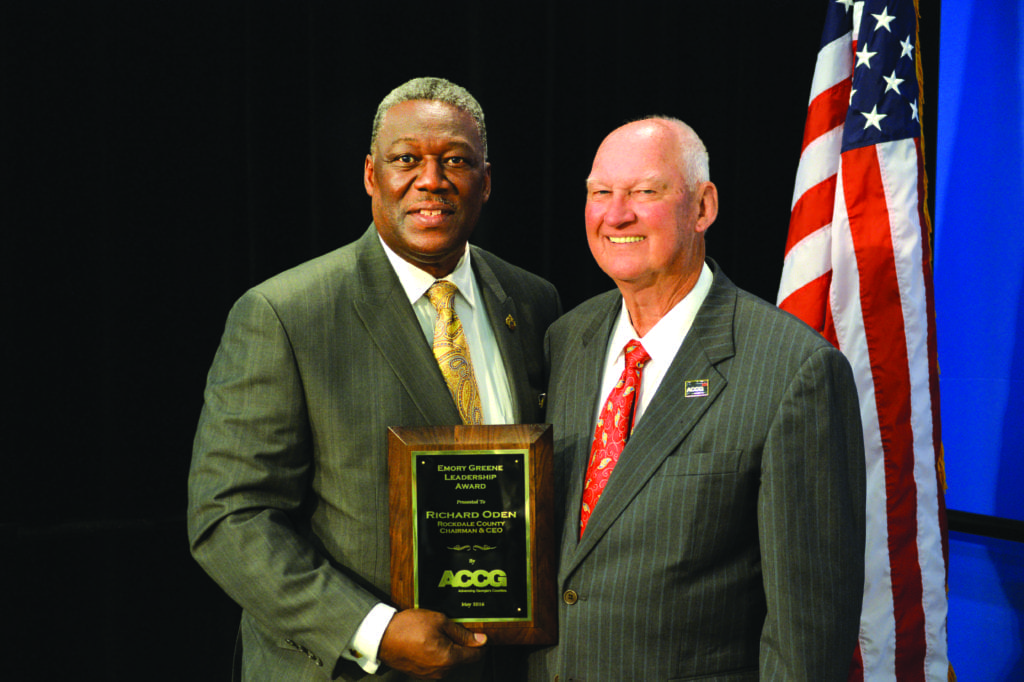 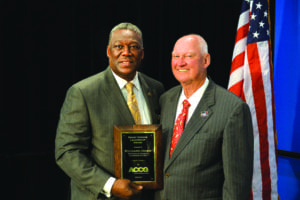 The Association of County Commissioners of Georgia (ACCG) has named Rockdale County Chairman Richard Oden the recipient of the 2016 Emory Greene Leadership Award.

Each year, ACCG presents leadership awards to recognize outstanding public service and leadership in county government. The Emory Greene Leadership Award is the highest honor a commissioner can receive from the ACCG’s awards program. Oden accepted the award this month at the Savannah International Trade & Convention Center during the 2016 ACCG Annual Conference.

“ACCG is proud to present Chairman Oden with this year’s Emory Greene Leadership Award,” said ACCG Executive Director Ross King. “It is an honor to recognize his service to those of Rockdale County as well as the members of ACCG with this prestigious award.”

Oden has served as Chairman of the Rockdale County Board of Commissioners since 2009. Under his leadership, the county secured a $2.7 million federal grant for the county’s Neighborhood Stabilization Program to redevelop foreclosed properties. Ninety-nine percent of the recipients in the program successfully maintained homeownership for three years.

Rockdale certification, awarded through the Atlanta Regional Commission. Rockdale, was one of five winners to earn the bronze level Green Communities Certification for its sustainability efforts. The county also was recognized for excellence in financial reporting from the Georgia Government Finance Officers Association.

Under Oden’s leadership, the county also has fiber ready, thanks to an agreement with AT&T Fiber Ready; more than 40 percent of the county traffic signals has been retrofitted with LED lights; and the county’s Parks and Recreation Department has new software that allows visitors to make online reservations and payments for all county facilities and recreation programs.

“I’m truly appreciative of this award because it’s a result of a wide-reaching, collaborative effort from the County’s directors, deputy directors, managers and our entire staff who believe in the Rockdale Government Operating Efficiency System known as R-GOES,” Oden said. “So I want to give accolades to them because they reflect what R-GOES is designed to do – build team synergy and break down silos while improving productivity, increasing effectiveness and efficiency. “Also, I want to give my sincere thanks to ACCG because this was a nice surprise.”

Oden is active in his local community as a mentor for middle and high school students. He also serves on various regional and local boards such as the Rockdale County Board of Health, the Walk of Heroes Veterans Memorial Park board and the View Point Health-Department of Behavioral Health and Developmental Disabilities board.

The Emory Greene Leadership Award is named in honor of the late Bibb County Commissioner Emory Greene. As Chairman of the Board, Greene was an outstanding leader in his home county, but he was also admired as a statewide leader in his service on numerous boards and commissions.