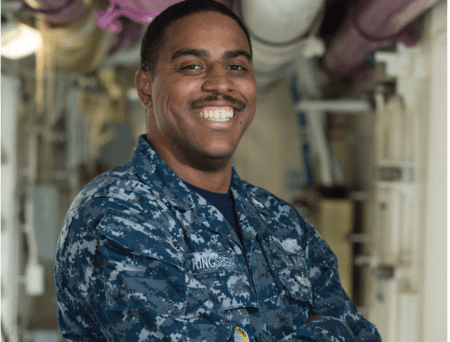 “What I do is similar to your regular neighborhood mechanic, except I do my job on an aircraft carrier at sea,” said Kingsberry.

The ship is 1,106 feet long, weighs more than 100,000 tons and has a flight deck that is 256 feet wide. Approximately 2,600 men and women currently make up the ship’s crew, which includes everything from washing dishes to handling weaponry.

The aircraft carries more than 70 attack jets, helicopters and other aircrafts, all of which take off and land aboard the carrier at sea, making it often a first response to a global crisis because of its ability to operate freely on any of the world’s oceans.

Kingsberry credits success in the Navy to many of the lessons learned growing up in Stone Mountain.

“I learned about the importance of hard work and always trying to improve myself,” said Kingsberry.

previousROCKDALE CONSTITUTIONAL CORNER: Did you miss your jury duty in Rockdale? Here’s what to do