The City of Stonecrest’s Urban Redevelopment Agency (URA)  purchased the building from Stonecrest Center LLC for $5.8 million. The 54,000-square-foot building, which housed  City Hall, Strayer University and other tenants, was originally listed at $6.5 million, according to a press release.

The transaction, which closed on Oct. 31, was financed by the URA’s issuance of $6,050,000 in aggregate revenue bonds, the press release stated.

A small group of residents, however, showed up to protest ahead of the scheduled special called City Council meeting, which followed the event. Residents held up signs demanding that newly-hired Deputy City Manager Gerald Sanders be appointed to replace former City Manager Janice Allen Jackson, who abruptly resigned from the position on Sept. 22, 2022.  City officials did not disclose why Jackson left and Jackson declined to provide details regarding her departure.

At the special called meeting, the City Council approved a recommendation by Mayor Cobble to immediately appoint CFO Gia Scruggs as acting city manager in order to meet the requirement under SB21  stipulating that the position be filled within 60 days after being vacated.  The mayor said the city had approached the critical 60-day deadline on Monday and the council needed to act immediately.  The council deadlocked 2-2 with Cobble breaking the tie to approve Scruggs as acting city manager. Following that vote, the council also approved a resolution to extend the period by an additional 90 days to find a permanent City Manager by utilizing a search firm. 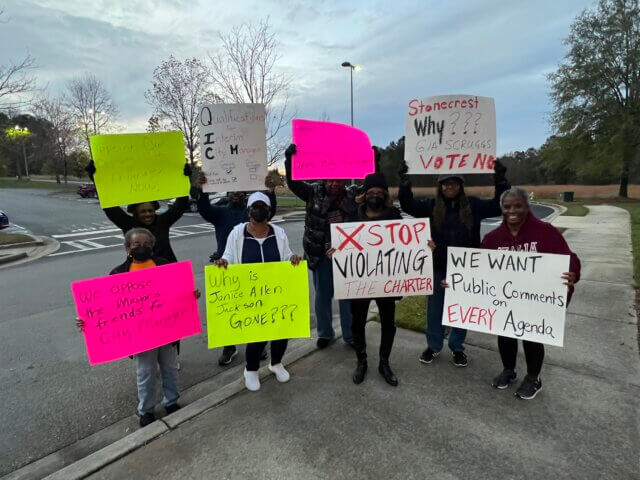