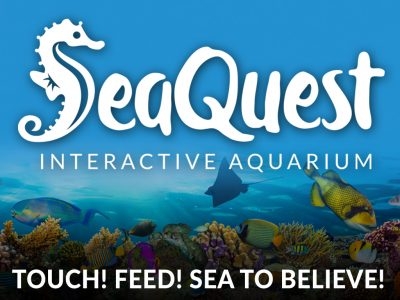 STONECREST—SeaQuest,  an educational land and sea attraction, today(June 2) announced that its newest location is expected to soon open at the Mall at Stonecrest, even posting ticket sales on social media and its web site.

City officials said this evening, however, the city is  still awaiting closing documents to finalize the $2.4 million purchase.

“Right now, the city still owns the Sears building. We have a letter of intent, but we do not have the closing documents from the buyers,” said City Councilman Jimmy Clanton, whose District 1 includes The Mall at Stonecrest. “I don’t know what the delay is but we have not closed as of today.”

In May, the Stonecrest Urban Redevelopment Authority(URA) unanimously authorized a letter of intent to sell the property to Stonecrest Resorts, a development affiliate of Urban Retail Properties, the organization that manages The Mall at Stonecrest. The letter of intent was signed on May 20 by Clanton, who is vice chair of the URA, in the absence of the chair, Mayor Jason Lary, who is on sick leave.

Mayor pro tem George Turner said the URA still must vote on the final contract and that is expected to be done at a special called meeting.

“The attorneys are still working out the details of the closing documents,” said Turner, one of the five URA members who approved the letter of intent.

Meanwhile, SeaQuest and mall officials said the attraction plans to open as soon as the city approves final permits.  They are shooting for this summer and are already promoting 30 percent off “passports” for those who want to be the first to experience the attraction.

The 25,000-square-foot indoor/outdoor development will feature adventures from across the globe including exotic sea life at the Caribbean Cove; tropical birds at the Amazon Rainforest; reptiles from the Egyptian Desert; and sharks, kinkajous and sloths among other animal attractions.

“I am extremely excited to be able to bring SeaQuest to Stonecrest and surrounding communities. When you touch an animal for the first time, you make a connection with it,” said Christian Payne, General Manager of SeaQuest Stonecrest. “Education through interaction inspires passion. And with passion, we can learn how to coexist with these amazing animals.”

Patricia Edge, General Manager of the Mall at Stonecrest, said the mall is looking forward to the new addition to the mall.

“We are thrilled to welcome SeaQuest to the Mall at Stonecrest. It will be a great addition to the Southeast Metro Atlanta community,” said Edge. “SeaQuest, combined with our other entertainment options, offers a unique experience that will be enjoyed by all.”