The fundraiser will be held on March 17 at the Mar-a-Lago Club in Palm Beach. Jones’ campaign e-mailed “Save the Date!” invitations to media and supporters on today (Feb. 25) for the event.

Jones is a former member of the GA House of Representatives (1993-2001, 2017-2021) and former Chief Executive Officer of DeKalb County, GA. A former Democrat, Jones officially switched parties in January 2021 after endorsing Donald J. Trump for President and speaking at the 2020 Republican National Convention.

Jones dropped out of the Georgia governor’s race on Feb. 7 and entered the state’s crowded 10th Congressional District the next day. Trump endorsed Jones in a video message that Jones’ campaign released on Feb. 9 on social media.

“When it comes to Georgia’s 10th Congressional District, I have only one choice, and the man’s name is Vernon Jones, a very special person,” Trump said in the video message.

The seat is open because U.S. Rep. Jody Hice is stepping down to run for Georgia secretary of state. Hice also has Trump’s endorsement. Georgia’s 10th district covers a section of the state southeast of Atlanta, extending as far east as Augusta.

“I’m proud to have President Trump’s endorsement, confidence and support as I seek to represent the people of Georgia’s 10th Congressional District,” Jones said in a statement. “America First movement is alive and well! The squad better get ready!”” 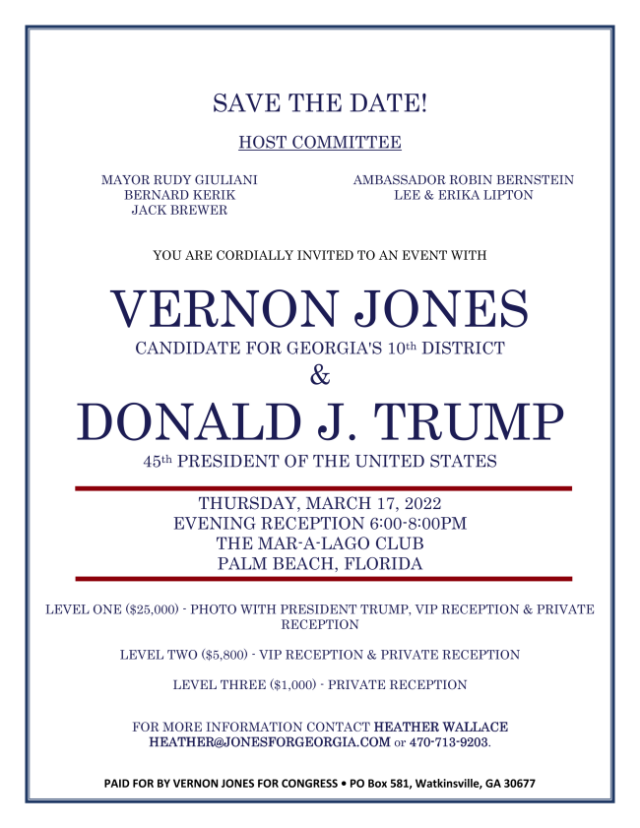